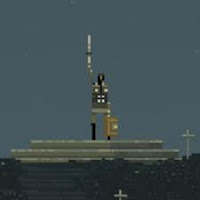 I've played some amazing games on my iPhone since purchase, but this carefully crafted pixel crusade, set in a world of swords and sorcery... Has 'em all beat.
The sound and music alone, created by musician Jim Guthrie, is simply mesmerising. Bizarre that I've never heard of this chap before, as the game score is one of the best I think I've ever heard.

There's four chapters in total, and you play the role of a warrior, sent on an errand to rid the land of an evil creature. Puzzles are lightly spread throughout the first few chapters, but towards the end you'll be hooked and equally haunted by them.


Despite feeling strangely familar, It's a digital fairytale like no other before it, and despite the slow pace, you'll be tapping and tilting your iPhone or iPad until eventual victory.

Don't let the pixel graphics put you off. It's without question one of the best games on the iPhone, and from a visual level, actually goes one better on the iPad. You simply must download this little adventure, i promise you won't be dissapointed.