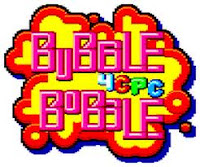 In development since 2008, the journey through the Cave of Monsters to rescue their girlfriends is finally on! Right now... CPC style! The game-play remains as simple as ever. You'll need to corner, capture and surrender all enemies using your bubble blowing antics before they can escape.

It wouldn't be fair to compare BB4CPC with the other 8-bit versions, especially when considering the time line. Instead, what we have here is the best damn conversion, we could have ever wished for, on the humble CPC. It completely trounces Firebirds effort of the 1980's, and unlike the CPC original, in this new version, the bubbles can't simply be popped by walking straight into them (I always hated that).

This time around, we've been treated to the original infectious theme tune, cute sprites, strategic game-play, oodles of secrets, tight controls and a largely responsive, albeit hit and miss Jumping system (Somethings gotta give). As usual, with this type of CPC game, Bub and Bob occupy a small playing area, with a touch of sprite flicker (Now I'm just being picky). Never the less, it's a much better version than Firebird's original effort. The overhaul in graphics alone, push this one miles ahead of the CPC original.

Bubble Bobble now boasts 16 colours, mode 0 graphics, and looks a thing of beauty. The amount of on screen action, especially in two player mode is exceptional, and this is where the game really shows its true depth. I didn't notice any slowdown, and the variety of enemies that move about in their different patterns, especially considering the already complex scoring system, seriously has you wondering how 64K of memory was anywhere near enough.

It's not without its faults though. For instance, the CPC version is a slightly easier game when compared to the arcade original, and the pace within the cave of monsters feels less manic. BB4CPC also includes a frustrating bug, before every level starts, Bub & Bob are unable to move until a few seconds into the game... this was not the case within the arcade original, and does spoil the experience a little (Hope this gets fixed soon).

If you've never played the coin-op version, you'll love it. If you have, you'll still  appreciate the effort and hard work that has gone into this conversion, as the game play remains largely authentic. The programmer has sensibly gifted the community with as much of the original game as possible, without any added gimmicks (although a level editor and on line multiplayer would have been nice).

Comments from the community
Retro Gamer - Looks good, but I'd still venture the C64 version is better.
CPC WIKI - Much better than Firebird's version of the game.