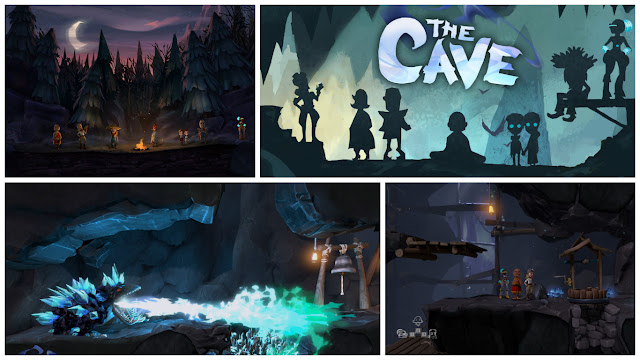 A freebie on Playstation Plus, I'd better play it for a bit. Now, what would happen if I get that object over there? Ah and that opens this...  now if I can just avoid that dragon. "Ahh, it got me."

From the creator of Monkey Island (Ron Gilbert), published by SEGA and tailored by the developer of Psychonauts... comes the eerily named title 'The Cave'. Ron Gilbert is an Amiga legend, his games are still with us today, released on newer formats (iPad, iPhone and Android) and still enjoyed by millions the world over. Here's a question. I wonder If we'll still be playing the Cave twenty years from now?

2013 seems a funny time for Ron to branch out, but here's his first game in over two decades. It's a game filled with logic, leaps of faith and death-defying jumps... The idea has been floating around inside Ron's noggin for the last twenty years. There's lots of narrative, clever puzzles and a sense of original humour not found in games today. Surprisingly, though, there's less dialogue than used in Ron's earlier games.

The story is set around seven people, the game gives a glimpse into each of the characters dark twisted desires. You must assemble a team of three from seven unlikely travellers. The adventurer, she is hot on the trail for lost companions, but equally in search of ancient treasures. Then there's the Hillbilly, his one desire is to find true love, and will stop at nothing to get it. The Scientist, she is on the cusp of a great discovery for all humankind, but not in the fluffy direction one might think. The Monk, he seeks a peaceful journey, enlightenment and the occasional murder. The Time traveller, she has firmly set her sights on changing a million years of history in the making. The Knight (My favourite character) he is on a quest for a sword of great magic and the power and prestige that comes with it. The evil Twins (My partners favourite) they just want to be normal, when the mood takes them.

The basic ingredients are all included, enigmatic characters, revenge, betrayal and more adventure than a three headed monkey could ever have. My partner and I played the game through until completion, she thought it really funny how the Monk climbed up a rope with his legs crossed and how the twins would turn and look at the screen with a naughty mischievous grimace. The music is very sparse throughout, but the graphics really suit the game's style and give you the feeling that it could be a believable place. A small criticism is that you have to play large sections of the game over and over. For instance; if you want to see each and every character's journey, the game mechanics prove a bit of a pain, as you can't experience all levels in one sitting. Maybe due to time constraints, but I didn't enjoy replaying the last level over and over. It's something that could be improved with future updates, as once you've completed the game, a 'skip level' option could be included.

Part of the fun is selecting a quirky character with dark secrets, the game somehow makes me think of those early LucasArt classics, but you traverse the levels in a fashion not too dissimilar to the classic game 'Myth' on the Commodore C64.
Harsh life experiences have forced the characters to become twisted, what's more, the initial laugh factor is backed up with some massively deep game-play. This is the nearest you'll get to originality in games today. A must experience, and fun for all the family. I nearly forgot to mention, the Cave does all the talking.


This is one the best games I have ever played. I'm not into games where you just go along mindlessly shooting stuff, and I don't like games where things jump out at you, they just bore me now. The Cave is good because you have to think about everything you're doing, remember where you've been, question what an object might signify, and use logic to work your way through the levels. It is essentially a big puzzle. I thought the guy who conceived this thing must have been some sort of genius, to be honest, to have been able to think this through so thoroughly. I love the characters, especially the evil children, and how they are all slightly dark, with their missions within the puzzle being either completely dishonourable or just plain wicked. I like the idea that you can play as the bad guy and do terrible things.

My only criticism and this is something I feel could be so easily changed, would be that once you have completed it with three characters, naturally you want to try another three and solve their puzzles/levels. The problem is you have to re-do all the 'in between' puzzles over again, which is really annoying. Then by the time you complete it again, with three different ones, there is the seventh character that you haven't used and can only use if you pick two others that you have already played with and go again. But then you would have to re-do not only the in between levels but the levels of the character you have already played with! The simple solution to this would surely be to have an option there where you can choose to skip a level that you had previously completed. We left out the scientist, as we couldn't be bothered to have to re-do all the levels again to get to hers, and it is bugging me, as I type this, that I don't know what hers is like.