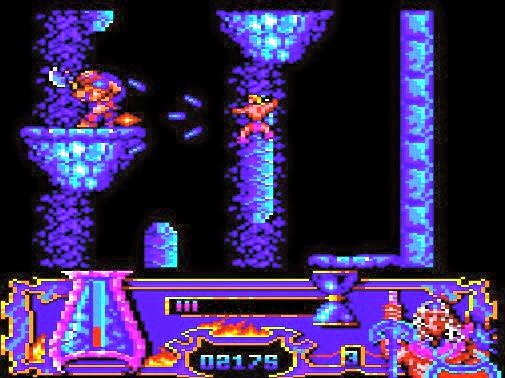 In Satan, you really do get to take on the main man, I mean the demon himself. Apparently, (don't quote me on this) there's lots of wizards that need your help, the devil has captured them and is set to use them against our world, in a most distasteful manner.
There're two parts to this fabulous game, with the usual Dinamic password system. The first level see's you traversing a large cavern; you must search and collect three scrolls to progress. These scrolls reveal a fabulous secret power, the ability to transfer from Barbarian to Wizard. The second level is more of the same stuff, only this time you're out to rescue the wizards and defend the land from the evil forces of Satan.
You swing from one area to the next, clinging for dear life, climbing from one pillar to the next, whilst unleashing unlimited firepower... Against the clock. There're all sorts of pickups, coins, power-ups and more importantly, clocks that give you that much needed extra time.
If you've ever played Black Tiger or Bionic Commando, you'll be right at home with Satan, both games were a complete dog's breakfast on the Amstrad CPC. But it was a sight for sore eyes to experience the look and feel of Satan on the good 'ole Arnold
There's a fair sprinkling of nasties throughout, end of level guardians and some neat effects. Back in the day, It's was games like this that left me feeling profoundly disillusioned as to why all CPC games didn't look and play as well as this. The wrongful abuse and amount of second rate Speccy ports we CPC owners had to endure, was nothing short of criminal.
The graphics were some of the best I'd seen for the time, big, bold and colourful, as only the Amstrad knows how. I loved the explosions and beautiful scenery, impossible to reach, but great on the eye. Sadly, music wasn't up to much I'm afraid, in fact, it was non-existent, but sound effects were suitably brash, harmful to the ears if turned to max.
Satan is a fantastic achievement on the CPC, even Amstrad Action gave it a 'Rave' review, with a score of 83%. The second opinion made me go out and buy the game! No regrets.
64 Amstrad commodore 64 Spectrum