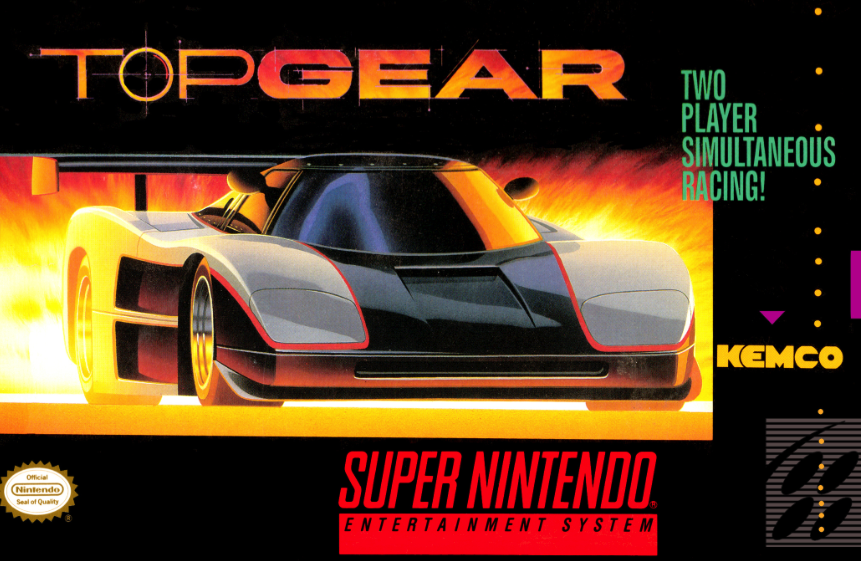 Based on speed alone, Top Gear on the SNES craps all over the likes of F-Zero and F1 Exhaust Heat! There, I’ve said it. Top Gear is just so damn fast! But there's much more to this wonderful game!

In Top Gear, you get to race through seven different countries, each one comes with its own events. In this you race through the streets of Paris, a sprawling metropolis, and the Sahara Desert; you notice all sorts of famous landmarks on your way to the finish line.
There are finely layered tarmac roads, dusty roads, and mud entrenched b-roads. The night racing looks and feels amazing, but there’s a constant fight for visibility. Motorways can be up to eight lanes wide; impressive when you consider the sheer amount of cars on screen at any one time. Your car is also equipped with three nitro boosts; as with the game ChaseHQ, save ‘em for the long straights.
You can choose from four vehicles, but I think the blue car gives the better balance, having a top speed of 137mph. The game features either automatic or manual transmission; I was too girly to go manual, so I opted for auto, but the game assured me that manual transmission was the way forward.
The programmers also included three skill levels, a password system, and two player racing. In two player, the screen is split into two halves. It's very similar to Lotus Turbo on the old Amiga, only ten times faster and twice the fun. In fact, Nforce is quoted as saying "Top Gear can become a bit repetitive with fairly similar tracks and after a while, predictable competition. But that doesn't make it any less addictive. In a nutshell, this is one bonza game."
I have to stress, the graphics aren’t the best, but being as this is all about the speed, this game does exactly what it says on the tin. In fact, there’s nothing else quite like it on the SNES! Whilst the music is fantastic, the sound effects left me cold, I mean, c'mon, where’s the engine noise?
To sum up, this is probably the fastest racing game on the SNES and leaves F-Zero stalled on the line.
Nintendo Super Nintendo