Goodbye to the Cast - Amstrad CPC 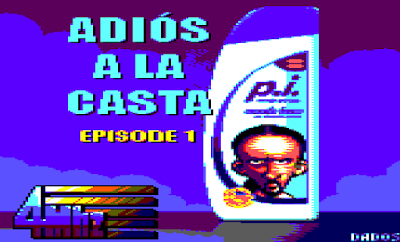 It's official, the Amstrad is still alive! Don't believe me, well, here's the proof, a new platformer from '4MHZ'.

Our protagonist looks miffed but in a take no prisoners sort of way. Skyscrapers tower the skyline, as you watch well detailed animated sprites play out before you. The inhabitant of this sparsely coloured world seems to be a happy chappy, despite being short, with a big head, ponytail and a sometimes blue appearance.

Relax, it's not a kids game, and you'd be making a big mistake if you didn't at least give it a try. You see, if you can handle the horrific Speccy looking graphics, you're in for a treat. As this game is a cracking little platforming adventure.

I've no idea what the plot involves, something along the lines of getting revenge, but it seems to me that you need to travel around, kill and collect things in order to progress. All you really need to know is that you run and jump around a fabulously detailed 128K world, collecting shiny things and killing evil people. The basic running around stuff feels so smooth, and the jumping and running can be controlled with amazing accuracy.

As a platform game, there's plenty here to keep you going for several hours. It feels like Donkey Kong but set free in a flip scroll adventure. There's Donkey Kong like moments where you can barrel jump over the enemy and climb ladders to the next enticing collectable, cleverly placed to test your lightening fast reactions. The only real problems I've found is that the game doesn't scroll, and for some ghastly reason, they've used the Amstrad's 'shite' resolution instead of the sixteen colour mode.