I’m just gonna go ahead and say it, I really like this portable, it's brilliant, I love it!

But despite what I’ve just said, I can’t really recommend it retro fans, for several key reasons:

Is it any good?

If this was a review based solely on the device and twenty bundled games, I’d maybe have no issue with recommending it to everyone. But unfortunately, it’s never as simple as that, and it would be unfair of me to recommend something without exposing some of the terrible issues, I’ve bumped into along the way.

For one, I’m unable to save my game progress on any game I’ve come across, which tells me that compatibility isn’t up to the standard I’d expect for a paid product in 2016. And, unfortunately, I’ve now played several of my favourite games, including Contra 3, Outrunners and Lotus Turbo Challenge, only to find all of them highly unplayable, for many different reasons. I’d say for every ten games I’ve played thus far, one refuses to work, despite everything I try.

That said, there're some real positives, it plays every region, the screen is really good, but only works at one brightness, ‘very bright’. There’s a headphone jack, essential, and an AV port, allowing you to plug directly into your TV, it works really well, once you’ve purchased the cable. A big plus is that batteries are not included because you don’t need ‘em, it’s a rechargeable device, that last’s a few good hours before needing a charge. Don’t leave it too long, as once the battery runs out, and so will your game progress.

I still really want one?

One of the game’s I looked forward to playing, was Outrun, and for the most part, it plays like a demon, but there’s a massive problem with the music, it just sounds completely out of step, which is a shame, as the music in Outrun is a big puller for me. There’s also problems with many of my favourite Megadrive games, Stargate, for instance, the game doesn’t allow me to run and jump, absolutely necessary in this type of game, believe me! The button just doesn’t appear to be configured, and I can’t find a way to configure it. The internal speaker sounds more like a buzzer, headphones improve things a little, but it might just put most folk off. 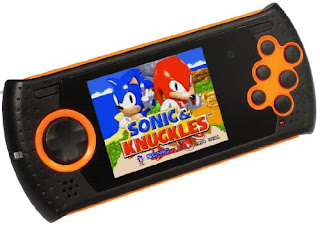 How does it control?

The D-Pad feels really responsive, as do the six buttons you’ll probably never use. But they’re really noisy. And if like me, you like to play games in bed, whilst the wife or girlfriend nods off, this will really piss ‘em off, as it wakes her up every time, worst still, our baby in no time at all.

The games bundled with the portable device work amazingly well, and for the most part, so do the games I’ve downloaded, but what I find acceptable, unfortunately, other people might not. This is purely for the gaming enthusiast on the go, who just wants to experience the past, in a massive back catalogue, from his back pocket, without spending a small fortune.

What other people have noticed: