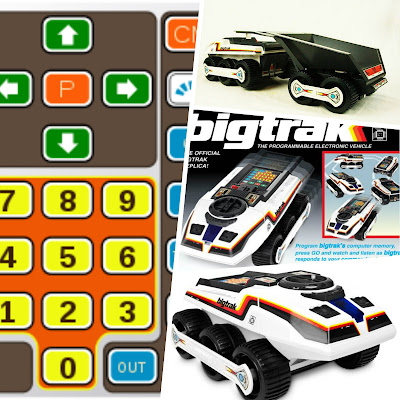 #Bigtrak gave us a glimpse into the future, it felt like cutting edge entertainment, and late seventies kids were the first to own their very own robot.

At the time, TV advertisements showed it effortlessly, but very slowly delivering apples and other items to parents. You'd see it carefully navigating around a dog or cat, narrowly avoiding a flight of stairs, firing a laser, before dropping off its payload to an unsuspecting parent.

What made Bigtrak really cool, is that you pre-coded it with a set of instructions, up to sixteen commands and three laser blasts, and it obeyed. You watched in awe as it cleverly followed your preset path. I tried all sorts of manoeuvres that would potentially scupper Bigtrak in its tracks, going up ramps, driving along steep ledges, but mostly used it to terrorise our dog. If you were lucky enough, Bigtrak came with an optional trailer, allowing you to impress friends by dropping off your Lego collection to other areas of the house, essentially dumping it, for mum or dad to trip up on.

I still have mine somewhere, but I think the motors shot... I accidently shoved a screwdriver into it back in the day, trying to peek inside, but owning one, still feels cool, and where would we be today without it?