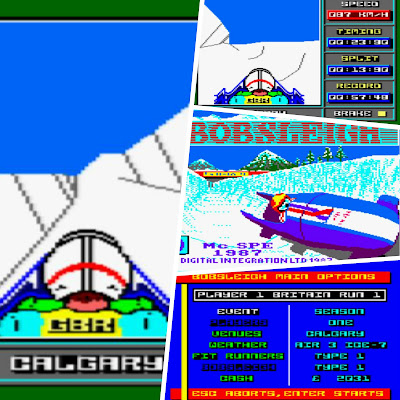 Long before Gran Turismo on the PlayStation, we had Bobsleigh on the Amstrad, Speccy, and C64. This game featured six tracks of downhill madness, tight corners, fast straights and the need for skilful bob riding. You started off in the amateur ranks, with a minimum amount of sponsorship money, clapped out Bobsleigh and a far from world beating team.

Qualification is really tough, getting to the bottom is relatively easy, but to do so at speed is especially tricky. Stunt Car Racer is perhaps the only other game that rivals Bobsleigh in the realism department, but the amount of options and strategy that needs to go into winning the Olympics or tournament, in my opinion, is unrivalled on an 8-bit.

If that wasn't good enough, there's also a load and save feature, you'll need this as the slightest touch against an icy wall, will cost you in the damage, time and cash flow department. Training the team is also a necessity, especially in regards to the run off at the beginning, but all sections of the ride, beginning, middle and end need to fall into place, in regards to securing the best lap times.

In a nutshell, train the team, repair the Bobsleigh, win races and try not to fall foul of bankruptcy. This is one of the best games I've ever played on an 8-bit system, I've played both the Speccy and Amstrad versions, and they're equally great. Unfortunately, I can't comment on the C64 effort, but eager to track it down.


What the magazines thought:

The winter sports simulation is still unrivalled for its realistic representation of bulleting down walls of ice in a metal tube.