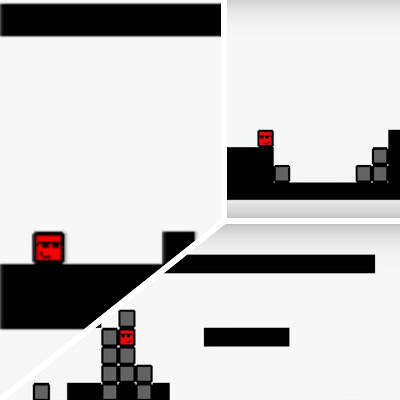 Meet 'CoolBox', the CPC's answer to the mobile phone marvel, it's 'Block Dude', only mixed with a look and feel you've probably seen in 'BoxBoy' which was released a few years back on the 3DS.

It's all a bit strange and confusing, but you're basically a box, a cool box, that must strategically manipulate the other boxes. CoolBox is in pursuit of an exit which is tactically positioned at the end of each level. It feels fresh, and get this, it's a puzzle game written completely in Basic 1.1!

It starts off easy enough, but it won't be long until the old grey matter will need to power into overdrive, which is surprising as there's nothing particularly technical going on. Throughout the game, we're treated to rough scrolling, sluggish controls, and non-existent graphics, but amazingly, it features clever game design and holds onto those elusive, hard to come by, all important ingredients, fun and addiction.

Despite the lack of on-screen action, it's a game where you most certainly have to think first and click later. CoolBox is simplicity at its finest, and just goes to prove, sometimes, less is more. If you're looking for a smart puzzle platformer, and like the idea of living life as a box ("Living in a Cardboard Box") I'd seriously give CoolBox a try, it'll certainly last longer than your typical throwback.

I'm glad I gave CoolBox a try, it's a great little gem of a game, and I was lost and captivated for hours by its elegance and smart design. Despite some of the drawbacks I mentioned above, you'll have a good time with it and I've never seen anything quite like it on the CPC, it's like BoxBoy, just not as good. Seriously, play this, it's fun and should hold your interest. C'mon! What are you doing with yourself, stop reading this, get up and download it now!
464 Amstrad AMSTRAD CPC GAMING Retro Gaming Retrogaming