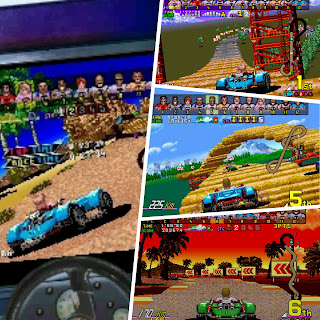 I'm sure gaming enthusiasts everywhere at one point or another have experienced the arcade behemoth that is Power Drift! In my humble opinion, it is still a great racing game, especially when you consider that it was released way back in 1988? I also had the Amstrad CPC version which turned out to be one of the best arcade conversions for the CPC. It looks a bit messy these days, but back then it felt just as fresh and in y' face as the arcade original. Seriously, it was like a roller coaster ride on steroids. I'm now playing the new 3DS port, which was released by Sega on their Classics Collection compilation, but I'm really struggling. Even on the lowest difficulty, I can't make it past the fifth stage, across any of the twenty-five different circuits. Thrilling and exciting this game might be, but far more difficult than I remember.

Lucky for SEGA fans, we now have a 3DS port, re-written and lovingly crafted in 3D. As with 'Outrun' released last year, SEGA has given things more than a lick of paint. The original was powered by Sega's Y-Board hardware, with sprite scaling the likes I'd never seen before. But here we have it running at sixty frames per second, with full-screen tilt and unbelievably tight controls, minus the crash and shunt of the arcade cabinet.

Yu Suzuki's Powerdrift is fast, smooth, and powerful, just like he intended and each circuit boasts an incredible tune, in fact, it's some of Sega's finest work. If you can't get your hands on the arcade original or the Yu Suzuki Game Works - Dreamcast collection, this is definitely the next best thing.
3DS AMSTRAD CPC Arcade coin-op CPC Dreamcast Nintendo 3DS Saturn Sega Yu Suzuki