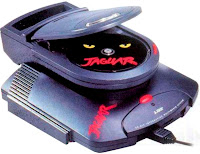 Is it any good?

Marketed as the worlds first 64-bit system, with the power to poo all over the Megadrive and SNES, why wouldn’t you want one. The graphics, and sound a thing of beauty… and the CPU as fast and as sexy as a ninja… or so we thought! All that power counts for nothing though, as the Snes and the Megadrives back catalogue of games kicked mostly anything from the Jags dodgy and severely limited line-up.
Should I still get one?

Hell yeah! The Jag had one of the best games ever made in Tempest 2000, courtesy of the Llama man Jeff Minter. Tempest 2000 is worth buying the console for alone. The 3D graphics and soundtrack are absolutely awesome, and the gameplay out of this world. Other games worth getting are Alien Vs Predator, Rayman, Doom, Wolfenstein, Raiden, Sensible Soccer, , and Power Drive Rally.

What to look for?

The Jaguar CD-ROM unit for the Virtual Light Machine audio effects! It’s a real thing of beauty, eye popping candy… basically it reacts to to your music CD’s and looks ace, works a treat with Dub-Step.

Can I Still Get One?

If you’ve got around £60 spare, you should be able to get one boxed with a few games included. There are lots of sites that would be willing to sell you one for a high price. Otherwise try www.ebay.co.uk. I got mine fully boxed a few years back for around £20 with a few games and an extra controller thrown in. The controllers are a bit nobby by the way, oh and make sure it comes with a Scart lead.

The console has a very active homebrew scene… with games such as Battlesphere and Frog Feast doing the rounds. Don’t forget to check out the website Atari Age at http://www.atariage.com/ for more information.
Atari