Konami on the Amstrad CPC

Konami is famous for its arcade games, what's strange when it comes to the 8bits and in particular the Amstrad CPC, is that instead of using other software houses to convert their licensed games onto home computers. Konami sometimes produced its own conversions. I think the first was prison break for the humble Amstrad CPC.
Post a Comment
Read more

Why I Love the SEGA DREAMCAST

The Dreamcast is a home video game console released by Sega on November 27, 1998 in Japan, September 9, 1999 in North America, and October 14, 1999 in Europe. It was the first in the sixth generation of video game consoles, preceding Sony's PlayStation 2, Nintendo's GameCube, and Microsoft's Xbox. The Dreamcast was Sega's final home console, marking the end of the company's eighteen years in the console market.
Post a Comment
Read more

Sinclair Research Ltd. released the ZX Spectrum, an 8-bit personal home computer, in the United Kingdom in 1982. The Spectrum was one of the first mainstream home computers in the United Kingdom, comparable to the Commodore 64 in the United States. The advent of the ZX Spectrum resulted in a surge in firms developing software and hardware for the system, and some credit it with launching the UK IT industry. Head Over Heels, Jet Set Willy, Skool Daze, Renegade, R-Type, Knight Lore, Dizzy, The Hobbit, Way of the Exploding Fist, and Match Day 2 were amongst the top 10 ZX Spectrum games. The Six Most Important Games - ZX Spectrum https://youtu.be/9TTAtrp-kpM via @YouTube #ZXSpectrum #8bit #Sinclair #Retro #RETROGAMING #retrogamers
Post a Comment
Read more

The Amiga is a family of personal computers sold by Commodore in the 1980s and 1990s. Based on the Motorola 68000 family of microprocessors, the machine has a custom chipset with graphics and sound capabilities that were unprecedented for the price, and a pre-emptive multitasking operating system called AmigaOS. Although early Commodore advertisements attempt to cast the computer as an all-purpose business machine, especially when outfitted with the Amiga Sidecar PC compatibility add-on, the Amiga was most commercially successful as a home computer, with a wide range of games and creative software.
Post a Comment
Read more

This patch completely replaces the original engine, adding performance improvements and new features, as well as missing levels from the Jaguar port. Multi-region, supports both PAL and NTSC. Smoother yet faithful gameplay. Splitscreen coop and deathmatch modes. New title screen that resembles the Saturn and PlayStation versions. Rendering has been spread across both SH2 processors for better speed. User input is processed at 30FPS, while game logic runs at 15FPS. Low (two pixel modes) 128×144, 128×160, 160×180 and high detail 224×128, 252×144 video modes. FM Synth soundtrack courtesy of Spoony Bard Selecting between no music, VGM FM music, or playing music from attached Sega CD (requires Sega CD in addition to 32X). Stereo panning for game sounds. Save ram support - keeps track of finished levels, health, armor, weapons and ammo - eight save slots as well as an auto-save at the end of each level. Includes levels that were omitted from the original release. Restores sprite directions
Post a Comment
Read more

Remembering David Lawson, one of the founding fathers of the UK games industry 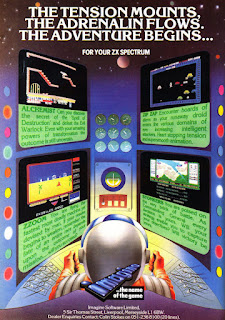 All good things must come to an end, even for early pioneers of the UK computer and video games industry. We lost Sir Clive Sinclair in September, and now David. What we can still cherish is the legacy and memories these early visionaries gave us through computer and console TV entertainment. I feel very lucky to have grown up during the late 70's and early 80's. Everything felt extreme back then, the clothes, the hair, music and the hundreds of blockbuster movies. All the while computer and videogames were quietly going about there business, until the likes of Imagine that is. Later came an even big splash from Ocean Software, but quietly so when compared to the material obsessed yuppies of the decade.    Cecil Rhodes once said, "To be born English is to win first prize in the lottery of life." But to have worked within the computer and videogames industry during the 1980's and help shape it, surely that is the ultimate icing on the cake.   R.I.P David Lawson
Post a Comment
Read more

Killer Gorilla is a clone of Nintendo's Donkey Kong arcade game. It is a four stage platform game set on a building construction site, where stages consist of girders, ladders, conveyor belts and elevators.  The object of stages one, two and three is to reach the top of the screen where your girlfriend is guarded by the eponymous Killer Gorilla. On stage four the objective is to remove the rivets from the girders, causing the top of the building to collapse and the gorilla to fall.  On all stages, items belonging to your girlfriend can be collected for extra points. When stage four is completed, play loops back to stage one. On stage one, the gorilla rolls barrels down the screen. These can be avoided, jumped over, or smashed with a hammer that can be collected and carried for a short time. If a barrel reaches the flaming barrel at the bottom of the screen, it will sometimes become a fireball that rolls erratically along girders and up and down ladders. On stage two, conveyor belts
Post a Comment
Read more
More posts