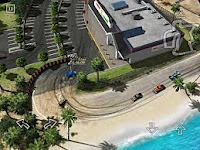 Reckless Racing HD is yet another fine example of what the iPad can offer as a gaming platform. RR is a fun and very competitive game, with a look and feel not too dissimilar to those seen from the 80’s series, The Dukes of Hazard.

It’s a top down racer, and could easily be compared to the likes of Super Sprint, Ivan Stewart's Super off Road or maybe even Super Skid Marks. However; what sets things apart, are the unique touch screen controls. Though a little sensitive at first, continued play proves not all iPad games are cursed by the touch screen.

The racing setup is mainly dirt rally, set in or around various junkyards. You basically have to slip and power slide your way to the finish line, preferably in first place. There’s all sorts of obstacles cleverly placed in order to slow you down, the more obvious being mud, rivers and large farm like structures.

The game includes both single and multiplayer options, with the latter showing improvements via updates on a weekly basis. Don’t get me wrong though, the single player still boasts enough of a challenge to keep you hooked for weeks on end.

RR offers lots of cars to choose from, crisp HD graphics, with an ultra smooth experience. It’s up there with Angry Birds and Cut the Rope in terms of the most fun I’ve had on my iPad. It’s a great game to pickup for five minutes or five hours… and is definitely worth your hard earned cash. In fact, I’d say this is probably the best top down racer ever made!
iPad