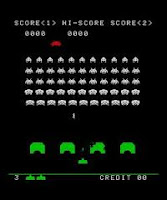 There are very few games that succeed in giving me controller rage, but the shoot-em-up’s from the late eighties, early nineties... should have come boxed with a massive warning label. Caution: You may experience fatigue and intense rage from failure; if punishment is your thing, go ahead and play.


Although shooters are initially accessible, don’t be fooled. The premise might appear dead simple, but military like discipline is required to progress to latter stages. Rushing in all guns blazing, Rambo style will only get you so far.
However; good hand and eye coordination, infinite patience, and a half decent memory might see you through, eventually.

Shoot-em-ups have had a tremendous influence on me. Their history intrigues, and the likes of Space Invaders, and R-Type can’t be matched for ambition. 1970 was apparently when all things gaming originally kicked off, and started calmly with Pong. It was a tennis game for one or two players, simple stuff, but it was the spark that set off the global empire of gaming for generations to come. However; the chap largely responsible for this beautiful mess I'm in, Toshiro Nishikado unleashed Space Invaders in 1978. And as far as I know, Nishikado drew inspiration from an early Breakout game supposedly written by the American, Nolan Bushnell.

I'm too young to remember its initial impact on the world, but like many I'm fully aware of its legendary status, and have played its genius on many occasions. Space Invaders threw the gamer into a stylised future, vaguely reminiscent of Star Wars. No previous experience was necessary; and any player could quickly jump in and cause as much destruction as possible.

The would-be pilot started with three lives and had to move his/her ship from left to right along the bottom of the screen, whilst using the shields provided to, in effect, hide and shoot as you brought down wave after wave of Invaders. The aliens started slowly, but with each take-down they descended ever closer, and became aggressively faster. Bonus points were awarded for taking out the Invaders in a certain order; and large UFO's would often fly across the top of the screen, giving the gamer the chance to score big if they nailed it. Many tactics worked, and a favourite of mine was to clear the lower row and middle section immediately, which dramatically increased your chances of progressing further, and increasing your score.

The trend continued, and many more shoot-em-ups arrived... Asteroids, Defender and Galaxians all proved popular, and for a while were considered some of the best games on the planet. In fact, the genre enjoyed nearly two decades of blasting, but sadly declined somewhat with the demise of 2D in favour of 3D. These days, it appears as if all the best shoot-em-ups came out years ago, with maybe only the bullet hell of Ikuruga standing firm as the last great bastion for the genre. Maybe there are others, but back in the day shooters ruled, and shoot-em-ups were notorious for really pushing the systems hardware.  Can the same be said for the likes of Pixel Junk Shooter, or any shoot-em-up of this generation of consoles?

In my opinion, the real cause of shoot-em-ups decline in popularity is that they need mastering, and in today's world with so many other distractions, time is something a lot of people simply can't give, and so gamers go for the easier option. But for those of us that don't yet have their own spaceship, and would simply like to fly through space with a laser guided missile strapped to their backs, however niche... will always long for a shoot-em-up.

The most crucial space battles:

Weapons That Changed the World

A living breathing weapon that can attach to the front or rear of the R9 fighter, delivering all kinds of nastiness.


known to many as the Beam, a weapon for all occasions, and any situation. No matter the enemy, once the beam has built up to maximum, it'll rip right through anything.


This is more of a holster, for every type of weapon available. Selectable weapons ranged from a missile weapon, laser, and double weapons.

ThunderForce IV: The Thunder Sword
This fantastic weapon must be seen to be believed. Let the energy build up in the ships core, then press the fire button to release a colossal burst of energy.

Radiant Silvergun: Radiant Sword
A polygonal sword that can deal heavy damage up close. As soon as the button is pressed it swings in a full circle around the craft

Ikaruga: Twin polarity
The twin polarity concept in Ikaruga changed the way we play shoot-em-ups forever... instead of trying to dodge enemy fire, switch polarity to the same colour of the enemies gun fire and absorb it as energy.