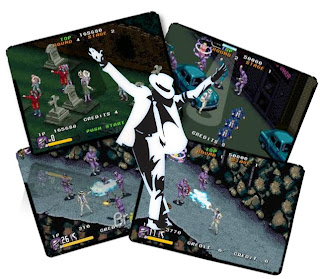 Does anyone remember the 8-bit Michael Jackson game, Moonwalker? Shocking wasn't it, but lo and behold, SEGA also released the game as a coin-op machine. Quick, run for it? Hold on a sec, there's good news... it's a completely different experience to the home version, and is essentially a beat-em-up.

Moonwalker the coin-op is better, ten times better... in fact, it's bloody awesome. SEGA were a bit more savvy with this release, and seemed to focus heavily on what Michael did best? Music! They've included sampled speech... who's bad! and incorporated synthesized versions of hits, such as "Beat It", "Bad" and "Smooth Criminal".

The graphics look really cool, and give off a much needed moody atmosphere. Moonwalker reminds me of Escape From the Planet of Robot Monsters in appearance, as it shares a very similar isometric view, but with much greater detail, and faster gameplay.

Moonwalker features five levels of awesomeness. The Cavern, Amusement quarter, Night Street, Graveyard and Evil Fortress. You must basically reek all shades of havoc, and stop off to pick kids up along the way (no pun intended). Then defeat Mr Big himself in a final showdown.

The 'smart bomb' or 'zapper' is arguably one of the best party tricks I've ever seen in a game? Press a button and the screen image shakes, and dims, a spotlight appears from over-head, and zooms over the king of pop. A rendition of "Bad" starts to play, and MJ dances around the screen. All the baddies join in, only to be destroyed when the music stops.

You really have to track this game down, gameplay is simple... and you'll enjoy this great looking, foot-tapping blast until the end.