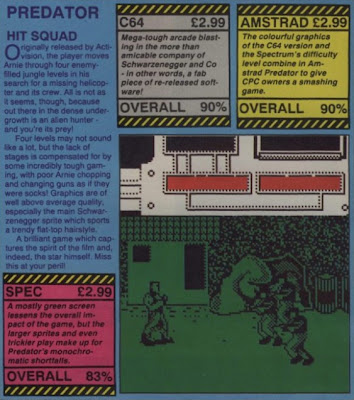 It sees the heat from your body, smells your fear. And hunts for pleasure, it's the Predator. It's time to shout loud, and look mean,  in one of the biggest movie / arcade conversions of the 80's.
If you weren't feeling old already, how's this for a nudge to the pipe and slippers: Predator is now over twenty four years old. It seems a long time ago now, but in June 12 1987 Predator became the first film to give the Rambo franchise a run for its money. I hardly need to explain that Predator involves shooting the bejesus out of stuff while dressed in your best camouflage. But anyway, the hunt starts similar to the film, with your team inserted deep within the jungle by helicopter.

If you don't like creepy crawlies then be afraid! As this game is harbouring even more dangerous forces than tiny insects. It's time to risk life, limb and chance losing your breakfast, in a fight to the finish (If you had any sense, you'd run like hell).
There's nothing here for strategy fans. It simply operates on a basic run and gun formula, and fast reaction. However; it'll give you hours of fun... and you won't stop until you finally beat the Predator to a pulp.

The Amstrad and Speccy versions are alright conversions, but the C64 effort captures the atmosphere perfectly. The scrolling is fast, but smooth, and the music eerie to say the least. A great game for the 8-bits, and especially the C64.