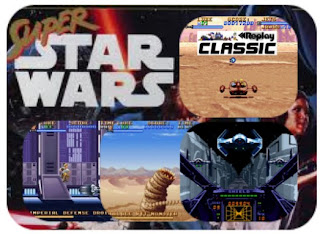 Star Wars is old skool... As old skool as a massive ruler straight to the back of the hand. In the late 70’s, early 80’s… Star Wars: A New Hope acquired iconic status in popular culture. It seems as if everyone was touched by the force, and Yoda. From it came advancements in sound, Special effects and the video game studio, Lucasarts.

Lucasarts are solely responsible for some of the best (and worst) games from a galaxy far, far away. But what game could possibly stand alongside such a great movie? Well; none really, but Super Star Wars on the SNES at least mimicked the film, and captured its essence, a teeny bit.

Super Star Wars first appeared on the NES console. The SNES version is basically a remake of the classic NES release from 1991, only this time with more scum and villainy. The SNES version was voted best action game of 1992. And the game is widely considered one of the best movie to game conversions, ever to grace a console, but that’s just warsie moron talk.

You play the title role of the legendary fly boy, Luke Skywalker, and his optional companions, Han Solo and Chewbacca - the Wookiee. Luke’s adventure starts out on foot, armed initially with a trusty ESB Blaster, and later left holding his weapon, the lightsaber. Luke is largely responsible for traversing through the beautifully delivered Star Wars stage props, including the iconic Sand Crawler, the infamous Mos Eislay, and the Death Star itself.

Levels mainly consisted of the run and gun affair. And saw Luke and his companions taking the fight to the Empire, through a variety of many famous locations, taken straight from the depths of the Star Wars Universe. The game featured fifteen levels, and as many different types of monsters, including the Sarlacc pit monster, Mutant Womprat and the Imperial defence droid to name a few. Storm Troopers are everywhere, and even the Bounty Hunter himself didn’t take a day off.

For the game to closely follow the films story, the programmers carefully introduced some of the most wonderful mode 7 sections the SNES has ever seen. This allowed for, and saw Luke piloting the X-Wing fighter towards the Empire's ultimate secret weapon, the Death Star. As ever, things aren't quite as easy as they could be. And from the off, using mode 7, Luke is intercepted by a massive squadron of Tie Fighters, led by the Dark lord himself. On reaching the Death Star, it's a case of skimming the surface, shooting the gun turrets whilst evading enemy fire. Eventually we are treated to the trench, and must make the famous bombing run straight outta the Atari arcade original, only this time in full colour.

All the sounds of Star wars universe are here, especially the unusual ones such as weapons going off, vehicles whizzing around, and key character voice overs. All things considered, It was an amazing achievement, the programmers successfully pushed the Sony sound chip to maximum, with a sound of authenticity.

Super Star Wars may not look like much by today’s standards, but she's got it where it counts. The visuals were originally noted for being well defined, and exploited the very programmable limits of the SNES. The cut scenes, music and wonderful presentation were again only limited by the hardware. The whole package is amazing, with the mode 7 sections, graphics, music and sound, and the sheer speed everything runs at. It's an experience no Star Wars fan, or equally gaming enthusiast should be without.