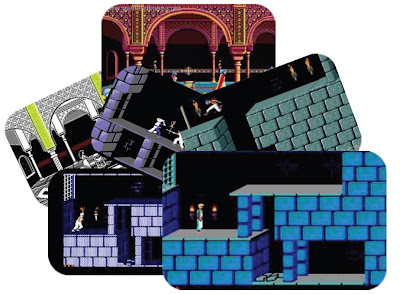 Set in ancient Persia, Jordan Mechner’s game follows a tale loosely based on the book ‘One Thousand and One Nights’. The story goes; many moons ago a rich Sultan is called to arms in a bid to protect his land against the enemies of Persia. Whilst away fighting in a distant land the Sultan’s Grand Vizier made an illegal claim for the throne.  The Viziers evil knew no bounds, and his insatiable desire for death and destruction seeped throughout the Persian kingdom, destroying the very fabric of Persian life.

Only a rag-tag unlikely hero is prepared to stand against the Grand Vizier, a humble man with dreams of glory, who one day hopes for the hand of the Sultan’s daughter. The Prince, our hero, is imprisoned, since Jaffar (the Grand Vizier) also has designs on the Princess. Knowing about the history between them, Jaffar also imprisons the Princess, giving her an ultimatum and one hour to decide, marry him or die.


The game starts with an amazing intro, playing out the story so far and ending with the Vizier locking the Princess inside the tower. Not only was the intro and presentation a welcomed addition, the game design saw the Prince of Persia being played out in real time and was one of the first games to feature live action footage. The prince was able to mimic the swashbuckling sequences taken from early Hollywood cinema to wonderful effect.

Prince of Persia is an action packed tale, albeit at a brisk pace. Controlling the Prince initially feels like a pretty standard platformer, until you come across your first gaping crevice. Push left or right on the controller and our Prince runs in the chosen direction. Hold down the fire button and he treads carefully. There are times when you’ll just have to take a leap of faith, often needed as our Prince has to navigate huge chasms; he jumps with such majestic grace whilst catching the opposing ledge by the skin of his fingers.

Everything just works as you’d expect, and you’ll actually start to care about the Princess and her fate. The predictable proceedings never wear thin as the games design pushes you onwards and upwards. I never once got stuck and getting lost seemed impossible, however progressing could prove a handful for some, especially when confronted by the many perils that lie in wait, including falling platforms, spikes and blades that kill the Prince instantly. But these are mere microwave dinners compared to the swashbuckling escapades the game serves up on later stages.

The animation here is outstanding, with smooth and beautiful graphics throughout. It must be said that the music and sound throughout do their job, but one can’t help feeling things could have been better. Prince of Persia goes a long way towards engaging the player and despite its silly but loveable plot, Prince of Persia is a game fit for a King, never mind a Prince.