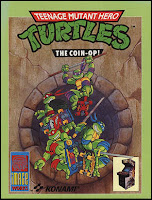 Once again, it’s up to the Teenage Mutant Ninja Turtles to come to the rescue! Once again Shredder’s after world domination and has kidnapped April and your sensei Splinter (a giant rat) in order to hold them, until completing his plan. April and Splinter are being hidden deep within the bowels of the Technodrome, which just happens to be heavily fortified and primed full of traps.

Teenage Mutant Ninja Turtles is an action packed game based on the late eighties/early nineties movie and cartoon series of the same name. You play as the Pizza eating Leonardo, Michelangelo, Donatello and Raphael, and have the ability to swap between turtles at the beginning of each battle.

Gameplay takes place from a side scrolling perspective, with most of the action taking place on foot. In addition to each turtle's main weapon, sub-weapons (such as explosive devices can be acquired and used to blow up a screen full of enemies. There are eight levels in total, each with its own end of level boss… and a futuristic hover board section where you have to topple the bad guys from their boards.

Graphics are probably some of the best seen on the CPC, although the main turtle sprites and animation do look a bit nobby. The scrolling is quite smooth and the mode 0 colour choice has been used to Amstrad perfection. The title screen and presentation throughout is accompanied with music from the TV show, but sadly was omitted whilst playing in-game, maybe due to memory restrictions.
Amstrad Commodore Spectrum