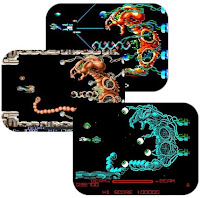 One small ship for man, one giant leap for the CPC...

Some twenty years after its launch, R-Type is back for the CPC. It's horizontal blasting like you've never experienced before, and lacks nothing of the coin-op original. In fact, this is the ultimate 8-bit home computer conversion.

This is without question, a massive improvement over the Amstrad original. Graphics look tremendous, although perhaps a little gaudy in places. Sound is spectacular, considering most Amstrad games produced sound effects that could be bettered by a man, two spoons and a piece of paper, but that's not the case in this version - the programmers have produced some of the best music and sound effects ever heard on the CPC. This along with the gameplay, combine to provide an amazing conversion of the coin-op classic.

R-Type on the CPC is a vault of mystery - unexplored and holding new secrets. It's difficult, but with manners, the graphics flirt with you, whilst the enemy rages war. The handling is spot on, supports two fire buttons, 128k of ram, features smooth scroll, an entertaining intro, along with tons of other CPC-exclusive features to keep you coming back for months. If fault can be found (and you'd be hard pushed) some might find the squat screen does slightly limit maneuvering, but the game is all the more challenging as a result of it. R-Type should prove a challenge to any shoot-em-up enthusiast, a very big challenge.

Huge end-of-level guardians, lots of levels and non-stop shooting of anything that breaths. From the Master-system to the ZX Spectrum, R-Type succeeds, but never better than on the Amstrad CPC.