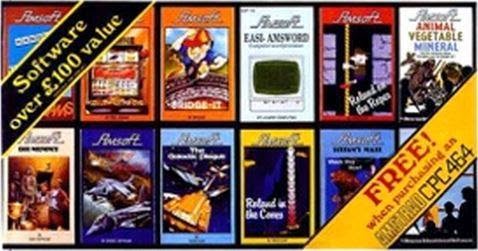 You might not have heard of Amsoft, but you might be familiar with some of their games. As a kid, I had an Amstrad CPC; it was of immeasurable importance to me. I still remember peering through the window of Dixons, past the disorganised arrangement of goods, situated between a Commodore 64 and ZX Spectrum, was the Amstrad CPC. It stared straight back at me with its large colour screen and towered above its competitors. This machine's primary function was not intended to be gaming, but Renegade, Operation Wolf, ChaseHQ, Wec-le-mans and Robocop soon changed that!

The Amstrad came with a hefty amount of free software, which included Harrier Attack, Sultan's Maze, Roland on the Ropes, and a handful of US Gold classics, thrown in as an extra incentive to buy this machine. My cousin and I spent hours with Harrier Attack, although we had hoped it'd been a two player game! I'd fly hard, low, and fast, bombing a string of hi-rise buildings, before rejoining the fleet. The momentum would increase and it became more difficult the longer you survived.

A favourite of mine was a game called 'World Cup'. This wasn't included in the pack, and those familiar with this game will likely remember that it was crap beyond all belief. However, back then, EA Sports weren't around to set any benchmarks, and it was free! I played that game endlessly becoming so skilled at it, that nobody could beat me. The same story applies to a game known as 'Oh Mummy'. Basically, this was a PACMAN rip off, but equally as playable and addictive, and none of the other members of my family could get enough of it; my uncle even bunked off work several times so he could come over and play it! My Dad, on the other hand, was hooked on a game called 'Fruit Machine'. He would sit there for hours with his fingers poised over the keyboard, and the screen glow illuminating his focused facial expression. All of a sudden, he'd jump for joy as the monitor flashed with psychedelic patterns, and the sound signifying victory: he'd won the jackpot!

I suppose the CPC was a bit of a commercial flop for Amstrad. Against the ZX Spectrum and C64, it showed early signs of promise, but in terms of sales, it proceeded to scuttle off into mere obscurity. However, it remains one of my personal favourites and is a system I'll continue to play for many years to come. If you owned the Amstrad CPC, you'll already understand the fun we had playing these games. There was something for everyone, and apart from a few duffers, I played Amsoft games for hours on end, especially 'Roland on the Ropes', this would follow with a really intense sleep before I'd emerge from the covers to play some more. The CPC made a big impact on my life, and that of my family's; learning to program in basic was a highlight, but being a part of the early gaming culture, and playing these classic Amsoft titles, will stay with me forever!
Amstrad