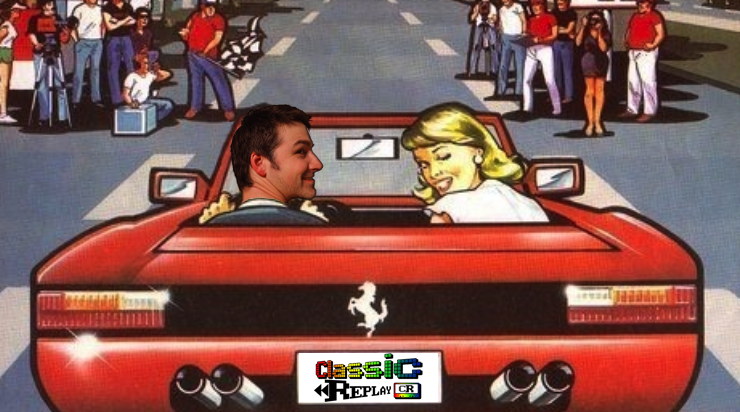 In 1986 we visited the Trocadero, in London, on a school trip. This was way before I’d even heard of SEGA; before the Trocadero became SEGA World. I was eleven at the time, and the then Trocadero was a mixture of entertainment, cinema, and shopping.  I had already played on few arcade machines in my local chippy, Donkey Kong, Pac-Man and Pole Position. But It was during my short time in the arcade area in the Trocadero, that I first became aware of the many different types of gaming.

As I travelled upwards on the escalator, there were several arcade machines sparsely dotted around the place, but the machine that stood head and shoulders above all others was a stunning piece of machinery called 'Outrun'! The cabinet resembled a small Ferrari, but constructed out of wood and finished in a vibrant red. It looked remarkably like the real thing inside, with peddles for the accelerator and brake, a gear stick and speakers as tall as a toddler, sticking out at me. I slowly stepped into the car, with the meticulousness of a cat walking along a narrow fence. I inserted a coin, sunk back into the chair, and allowed myself to be immersed in another world. I don’t recall a single game wowing me in quite the same way as Outrun did; it was a great memory and a great experience.

Today the Trocadero is merely a shadow of its former self and I was never able to return to relive my initial experience during its heydey, but alas It wasn’t long until Outrun arrived in my local arcade in Birmingham. I was seriously hooked on the experience, it might as well have been me sitting next to the blonde, I was the guy racing a Ferrari, every weekend, without fail. It was little old me driving up and down the American highways and byways of Yu Suzuki's masterpiece. The more time I spent with the game, the more skilled and I became and determined to beat it. For a time, I was yet to complete the easiest of all the routes. Terrified of making a mistake or flipping the car out, with every blunder, I persevered, played again and my skill and confidence seemed to increase with every fifty pence dropped. I must have played it so hard that my hands nearly bled, until unexpectedly, after weeks of playing, I reached the chequered flag!