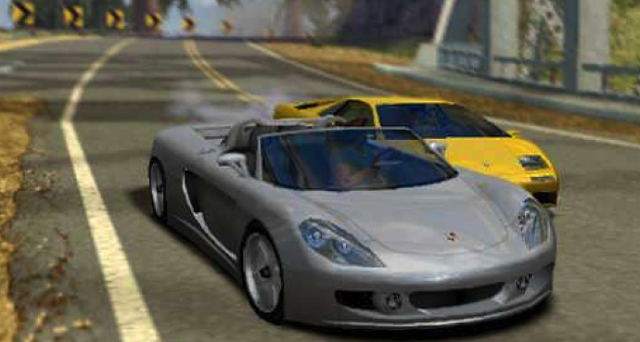 In 2002, EA released a sequel to one of their biggest and most respected flagship racers; once again you could be the cops or beat the cops! The problem is, I had the GameCube version, graphically brilliant, but decidedly average due to 'laggy' controls. The good news is, I’ve recently discovered the immensely playable PS2 version which was developed by a completely different team, a Canadian group known as ‘Black box’. I’ve no idea how I came across this game, probably bought it years ago and stashed it away with the best intention of one day playing it. How many of us have done that over the years?


This version is really fast, a little too fast. The Need for Speed brand is stuffed with more exotic cars than a petrol head could poke his stick at, with forty-nine cars in total, each with their own strengths and weaknesses. The cars stick to the surface like glue, but there’s a powerful feeling of contention between the car and road, as you push for extra distance and hold on for dear life. Big air is possible, it'll get you extra points, shiny new cars, and you'll be rewarded with hidden locations, but after six laps of hard racing will you really want to risk everything? Hell yeah!


I was excited to find two career modes, Hot Pursuit and Championship mode. Hot Pursuit is mental; this bad boy is split over thirty different events as I competed against other rivals, but more importantly, the police. The harder I raced, the more aggressive 'the fuzz'. And it’s wasn't long before the helicopters and cavalry were summoned to put me down a peg or two. When playing as the Police, you can radio ahead for a barricade's, spike traps and a helicopter to assist in chasing down the target vehicles. This part of the game might as well be ChaseHQ, but guess what? I effing loved it!


The Championship mode really takes Need for Speed back to its roots, there’s a wonderful season of racing set for a total of thirty wonderful events. At one point in the game I was racing in a Ferrari 360 Spider, the next I was ragging a Porker Carrera GT. There's a pan-Atlantic desert heat where the UK faces off against the USA, the British roll out the Aston Martin V12 Vanquish and the American’s Ford SVT Mustang Cobra R, each round is an elimination, the winner gets the spoils and unlocks more levels and more cars. It all adds up to massively awesome fun.


There are a few glitches in the game, for example, in the ultimate race event I had a cop smash into me; I was busted and out for the count, but then the game flashed up with a big message proudly proclaiming "You've Won", I'd succeeded and got the fastest lap. I was only two-thirds of the way into the challenge and I’d already rigged an event. Controls in the PS2 version are very precise, you’ll forget you’re using a PS2 controller; the other versions don’t fare so well in this department. The camera moves slowly and it can prove difficult to adjust when needed. There’s a steamboat like lag between controller and console, it just isn’t possible to steer perfectly through a good corner, which in my opinion is paramount. Control is everything, and the lack of it just served to disconnect me further from the game.


Graphics and presentation border on spectacular, the fog and water effects are where the PS2 seriously shows off, the cut screens and camera replays have been cleverly and beautifully crafted together. Bodywork damage is featured, but minimal, and the vehicles stashed away are beautiful to look at, even when being played out in the game. It’s hard to believe I am playing a game that looks this awesome from way back in 2002. Music is great, but the hard rock grinds after a while, as the same tracks from hot Matt Lanning and Rush play over and over. At one stage I turned it off, the authentic roar from the engine and amazing sound effects were all that was needed.


I'd wager that Hot Pursuit is as good, if not better than every other racer I've played before it, yep, up there with Burnout, Metropolis Street Racer and dare I say it, the legend that is 'Outrun'. You'll want to come back over and over, just to experience the extremities of all the cars. There's a special bonus stage if you manage to win the World Championship, where you get to race a fully-fledged Ferrari F50. I won’t spoil it for you, but there’s an awesome surprise awaiting racers who make it this far. All highly secretive stuff, but to say this game keeps on giving is an understatement.


If you like the idea of a wind chased face and chapped lips, Need for Speed Hot Pursuit 2 on the PS2 is a definite to check out!
Playstation Playstation 2