MegaBlasters - Escape From The Castle In The Clouds 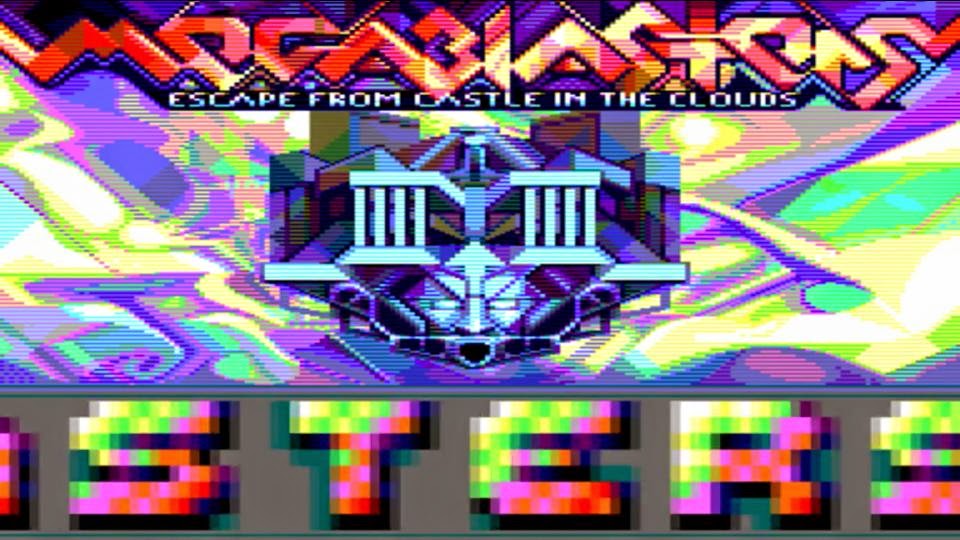 Just when you thought you had played every single game available for the CPC, along comes the official sequel to MegaBlasters! The original was released in 1994, with Amstrad Action awarding it 'MasterGame' with a score of 94%. This sequel marks the 20th anniversary of the game and what better way to celebrate than to release a sequel.

The four CPC Legends of 64K: Axeley (Programmer), Rexbeng (responsible for original graphics), McKlain (bells and whistles) and Tom & Jerry (beautiful music), have embarked upon their finest production yet, and it's a  real homage to the CPC! Axeley is quoted as saying "I sadly never encountered the original MegaBlasters when it was released, so for me, this game has been about bringing Rexbeng's great looking mockup to life. And it was also an opportunity to work on a game that required a different kind of game engine".

The new MB takes the original game but respectively improves on the tiniest of details without destroying its formula. For instance, a pet hate of mine on the CPC is the 'crippled' black border around the edge of the screen. In this new adventure, Axeley has cleverly utilised the full area of the display. That's right, no horizontal or vertical borders. Amazing that we still have the same detailed graphics, and fluid speed, as seen in the original.

The game is also shorter, much shorter, with only nine levels. For me, this is a step forward, as I still haven't completed the original. This new sequel is definitely keeping me interested. Right from the beginning I've found this game provides an excellent challenge. I'm yet to find out if the game features extra characters, secrets or alternate endings, but shortening the game has massively improved things in my opinion. They've taken the difficulty levels of each world spread throughout the original, and squashed it down, creating more of an arcade experience. It's a great feeling to experience a level of challenge that continually increases at pace. In comparison, playing the original for its entirety, is like having your camera shutter speed stuck on 'slow'.

This new game has simply spiced things up with a lick of paint, courtesy of the future. It's the same game, with the same frills and spills, and the same tight controls; a miniaturised sequel if you like, based on pure nostalgia.

I can't help but feel I'm part of a highly intelligent game word. The enemies don't let you have it all your own way; they'll run and hide, try to flank you and more. The stock characters of the original, the pickups, and the icons are still recognisable, and the venue still looks and feels familiar. I haven't experienced the two player elements of the game yet, but I'm informed it's equally as satisfying, and guess what? There're extra screens!

With the same great gameplay and feeling throughout that 'you've got to get yourself out of a dangerous situation'. As far as I was concerned the original was the best ever Amstrad game. But for me, the King has truly been succeeded, and this is now, not only the new best Amstrad sequel but best CPC game ever! Come on guys, give us a trilogy!
Amstrad