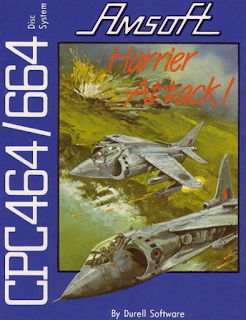 The RAF had an insane idea, instead of taking off horizontally (creatively speaking that is) why not take off vertically? Early testing involved eight Kestrel aircraft, (the prototype and forerunner of the Harrier Jump Jet) testing involved taking off from unprepared fields and woodlands. The results proved the concept worked, and in the late 1960’s, the RAF placed the Harrier into active service. Although the RAF have long since taken the Harrier out of service, today; the US marine corps continue to use its services and will continue to do so well into 2030!
This was one of the first side-scrolling games for the CPC, it was released a year earlier on the Speccy and received favourable reviews. I suppose most people today will think that Harrier Attack belongs and should stay in the scrap yard, but back in eighty-four, not only was it my favourite aircraft, it fast became my favourite game and only aviation medicine.
There's no flying skills needed, the manual rests in your hands and in your head. Chaos looms behind every hillside, with the enemy gunning for a fight! It quickly becomes a game of swarm, swerve and strike. Harrier is simple in the looks department, but as the nature of the task becomes more complex, later levels feel like a stairway to hell. I love that you can bomb the bejeesus out of everything, buildings, gun emplacements, enemy planes and even your own aircraft carrier.
I look back now and wish Durell would have taken the concept a little further. I had high ambitions for the game, maybe even a sequel. But maybe its simple nature might just be its charm.
Failure is not an option in Harrier Attack, it’s just unavoidable…
464 Amstrad Spectrum