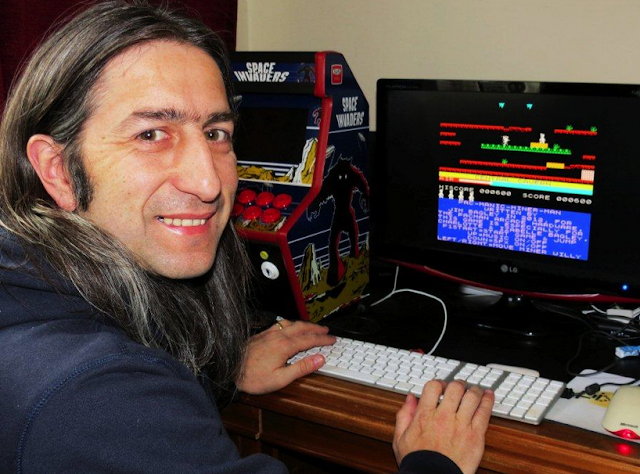 In the hot seat this month is 8-bit legend Jim Bagley. He's the main man and sole programmer responsible for many classic games on the Speccy and CPC. He was behind the fantastic Batman: The Caped Crusader, Cabel, Midnight Resistance and the massively addictive adventure, Hudson Hawk! But all these were nothing compared to what Jim considers his greatest achievement... Read on!

I played Batman the Caped Crusader to death?

Glad it was good enough to keep you playing, I enjoyed making it. and Hudson Hawk was a great game, Yeah, shame the movie was a flop, I really loved the game also, it was fun to make as well!

Amstrad Action awarded it a MasterGame! You must of been really proud?

Yeah, I was, especially considering the slating the movie got, it was like we were off to a bad start I guess the only way was up lol.

I loved Midnight Resistance, although a tad slow, played like a dream back in the day?

Thanks :D yeah it was a bit slow on CPC unfortunately, but it was pushing twice as much data around as the Spectrum version, I just wish I'd have had a full time artist on it, that could have done the sprites and backgrounds in full 16 colour mode, it would have made it so much better, the problem was once I had finished the ZX Spectrum version, I had to jump onto the CPC version, and Chas the artist jumped onto getting the art done for the next spectrum game, so only had time to do a quick 4 colour version of the spectrum graphics.

What are your thoughts on the eighties gaming industry?

The industry back then was an AMAZING place to work, there I was doing what I love doing ( making games ) and getting to work with some great and talented people along the way. And making games for the likes of US-Gold and Ocean, and doing Arcade and Movie Conversions, it was great fun. It was also a lot of hard work, and tight deadlines, but a lot of fun.

Tell me about the Amstrad and what it was like to program for, how did it compare with the other micros?

I actually liked the Amstrad, so much so I bought one myself back in the day, to make my own games for it, there were many great games on it, I loved playing Ghosts & Goblins, Ikari Warriors and Bomb Jack, The Amstrad had a great palette, but I felt it was let down by the huge amount of memory allocated to the screen, it was basically 16K for the full screen, whereas the Spectrum was 6.75K and the C64 was 8K, but that had lots of hardware for scrolling and it could have a character map display to save the processor a lot of hard work. but because it was 16K it was also one of it's strengths because you could have any pixel any of the 16 colours ( or more with interrupts ) thankfully you could also resize the display, and reduce it down to to less than it's usual 320x200 pixel display so you could save some CPU time, by having a smaller screen.

What did your colleagues in the industry think of the CPC?

Joffa didn't like it, because it was so slow compared to the Spectrum, I guess most of the other guys at Special FX didn't really see it as anything special as it wasn't even allocated an artist, or a programmer for that matter, I was only given Amstrad games because I asked if we were going to do them, unfortunately, I suppose they just saw it as extra sales for not much outlay, I just had to quickly as possible port the Spectrum version to the CPC, pretty much without the help of an artist, so it didn't really get the love and care it deserved. which is one of the reasons I've put doing a decent 16 colour CPC game, on my to do list.

How did your family feel about this early eighties obsession of yours?

My mum was very supportive of it, I started bringing the basic book home from school and reading through it, before I had even got a computer, and I guess she saw my thirst for knowledge of programming, and got me a ZX81, which then boosted my need to program further, as I could now make games and test them at home, rather than having to think them at home then wait until after school the next day to try them out lol

When contemplating your childhood and life now, what are your thoughts on being part and parcel of an industry that has now surpassed the music and movie industry?

It's mad to think that we were pioneers, at the time, it was just a job that we loved doing, there was no internet, there was no schools that taught it, if you had a task to do, you had to figure it out yourself, figure out how to do things faster, or how to make things more colourful, but that was half of the fun, I love a challenge, I still do! People have it so easy these days, I mean the likes of Unity or Unreal or even the simple game creators like Game Maker etc, they pretty much do all the hard work, which was part of the fun back in the day, creating the engine as it were, and it's a nice feeling to know that I was a part of that, I'm just glad that I've been able to be in it for 29 years now!

My girls, but I assume you mean my games, and I get asked this a lot lol, I'm lucky enough to have been blessed with some great games to work on over the years, so I don't have a proudest achievement, cos I'm proud of all of the games I've done. I'm proud of how well Cabal and Midnight Resistance and Hudson Hawk are remembered, I'm proud to have been part of the Doom franchise, even if it was kneecapped by not being allowed to use the 3D hardware to draw the screen lol, and because of that, I'm proud of how well it turned out considering that, as I really enjoyed the challenge :D I mean I even started in the games industry on a high of working on a Mike Singleton game! I've had some really iconic games to port also, as well as Cabal and Midnight Resistance, there was Road Runner, and Defender, and IK+ and Super Dropzone, and some movie tie-ins, albeit flopped movies lol. Arnie's Red Heat and Bruce Willis's Hudson Hawk, I'm even proud of my recent iOS/Windows Mobile/Windows PC game Apple Bob, which I initially designed back in 1995 and wrote it for the Megadrive, I'm even proud of my PacManicMinerMan game, it's my first ever Arcade game that I've written, I always wanted to do one back in the day, it wasn't until 2012 that I finally managed to fulfil that dream :D I'm also proud of my ZX81 Dragon's Lair, even though it's pretty simple as a game, I'm the first person ever to get the ZX81 to play videos. :D

What are your thoughts on the 2025 planned Mars mission?

I'm not sure I could do it, I'd love to go into space though, but I'd like to come back to my family and things :D lol I wish them good luck with it, assuming it's actually real and not a big scam. :D