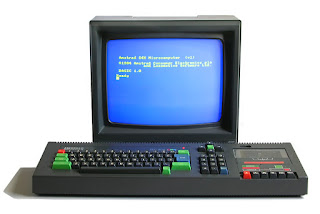 I'm old enough to remember when the Amstrad CPC was first launched, at a time I'd just joined a primary school and hadn't the slightest hope of ever owning one, however much I may have wanted to. But a house move in 1984 provided my father with the size of garage that allowed him some extra cash, by tinkering with and repairing old cars. That Christmas I opened my Presents, and there she stood, the Amstrad CPC 464 Colour Personal Computer, so here I am telling this tale.
The CPC looked a thing of beauty, came with plenty of oomph, more than enough to keep up with the ZX Speccy and C64; the operating system was really good and the screen, whilst certainly heavier than a modern monitor, took very little time to setup and get used to. While I was getting on with reading the manual, I tried to load my first ever CPC game, but everything I tried wouldn't work, the cassette player just wouldn't start. I was convinced the computer needed some attention. With previous cassette drives, you just put the tape in and pressed play. I was really concerned that I hadn't plugged something in properly and there wasn't enough power, I was beside myself. So over the course of the evening, my father had a look and within half an hour, one of the games started to load, life was never the same.
Thank you, father. Following the game loading, it had to be run in; so we played Bridge-IT and later all sorts of games bundled with the computer: Oh Mummy, Sultans Maze, Roland on the Ropes, Harrier Attack, oh, we know how to live. I remember bedtime was approaching, so we fired up Fruit Machine, just to make sure all was present and correct, several hours later it was daylight, we'd forgotten all about going to bed in the pursuit of winning the jackpot.
So, eventually, the time came for me to go to bed, I couldn't sleep a wink, couldn't stop thinking about my new computer, on the basis that anything which brings a smile to your face must be doing you some good. Next day, after begrudgingly sleeping, I set off downstairs for another adventure, my father was still sitting there, as if frozen, playing Fruit Machine.
We'd change every couple of hours, like drivers at the 24 Hour Le Mans. Just to take turns and top up with food. I remember the weather was really bad, so we all stayed in and played Harrier Attack. We played for about two hours, soaring through clouds and past wonderful scenery (that’s how I remember it). We first set out and hit our own ship by mistake. We then went on to tackle enemy planes whilst narrowly avoiding the very steep and winding hills, then we’d reach the city, but were held up for some time by flak and enemy missiles.
So this was it. Up before the crack of dawn to have a quick game before going to school, this went on for months (more like years). There was nothing else to do. After a while, we were lucky enough to buy several new games, including 3D Grand Prix, World Cup Soccer and the amazing Manic Miner. A real treat. And, guess what, we also bought the excellent Bruce Lee. Hooray.
These games took things to another level, my uncle would even bunk off work during the school holidays to play a few of them, but his favourite was Oh Mummy. We took turns to eat while the other played. My Amstrad was like the M6, totally clogged, friends and family queuing to have a go. It was a really successful little micro, in spite of its hardware limitations. The computer went beautifully for many years, with never a hiccup, and to my surprise, still powers up even today.
464 Amstrad CPC