Was it any good?

Acorn first released the 300 and 400 series of 32bit RISC technology in 1987. These early models used what’s known as the ’Arthur OS’, but was later replaced and renamed to the newer developed RISC OS 2. The 8MHz ARM 2 was about 25x faster than the BBC B, 15x faster than an original PC and 6x faster than a PC AT on benchmarks. On performance alone, Archie had the Atari ST, and even the mighty Amiga well beat. The CPU uses the wonderful ARM chip, which is still in use today. What’s that? It only has one hardware sprite? Who cares! Especially when you have this much processing power! Resolutions available range from 320 x 256 or 640 x 256 with normal monitors, but higher resolutions are possible. There’s a colour palette of 4096 available, with 256 available on screen, depending upon resolution. Models such as the 310 included (1MB), 3000 (512K), 410 (1MB), 420 (2MB) and 440 (Includes 4mb Ram and H.D.D.

16 channels (eight left and eight right). Six-Octave (a bit weak, narrow range). Two built-in speakers (average quality), but output can be played through the monitor. When used to its full potential, sound quality was probably the best of any home computer. Unfortunately; it can take massive amounts of effort for the programmer to get anything sounding half decent, this is down to the high amount of processing time needed to realise its full capabilities.

Should I still get one?

If you can find one, at a reasonable price, why not. But it lacked a seriously good commercial presence and there’s no joystick support unless you buy an external add-on. The Archie’s best games really stood out, Starfighter 3000, PacMania, Time Zone, E-Type, Iron Lord, Super 8-ball, SWIV,  Revolver, Chocks away, Power Band, Sensi Soccer, Chaos, Saloon Cars Deluxe, Zarch and Conqueror. The 'best' version of Elite was made for the 32bit Acorns.

What to look for?

Warning for all models, although a leaky battery is perfectly normal, leaky battery acid will destroy everything in its path, if left unattended! I’d personally look out for the 400 series, as the A305, in my opinion, doesn’t have enough memory. But if you can find one, and space and money are no objects, go for the well kitted out higher end RISC series. The A3000, A3010, A3020 are shaped similar to the Amiga and replaced the 300 series, but make sure you go for one with an HDD. The latter A3000 is surprisingly more upgradeable due to a larger case and clever board design. They are also much tidier and can live on almost any desk or table. In comparison, the A400 series was considered the most serious computer. You had H.D.D’s as standard. I don’t know much about the A540, but although superficially similar, it was marketed as a much more serious computer and capable of 16mb of ram. The A5000 is much speedier, shinier, with a higher density FDD, HDD. Giving the best compatibility with 3.5” software, I’m talking games, and the A5000 can take 8mb of ram.

There’s quite a good demo scene, emulation is near compatible with ‘RPCEmu’ and a stable favourite, but my choice would be Arculator, a much more accurate emulation, but you’ll need the appropriate Acorn Risc bios files.

These sites will help you out:

The ARCHIMEDES range includes the 300 Series and the more sophisticated 400 Series. All machines have features in common: • 32 bit RISC technology; • ergonomically styled in a 3 box presentation; • 'IBM enhanced' style keyboard with 3 button mouse; • British Broadcasting Corporation Micro style operating system (ARTHUR); • BBC BASIC V; • interfaces: printer, serial, monitor, stereo sound; • ECONET plug-in option; • a variety of modules can be fitted. THE 300 SERIES The 300 Series, identified by its red function keys, consists of two models, ARCHIMEDES 305 with 0.5 Mbyte of RAM and ARCHIMEDES 310 with 1 Mbyte of RAM. These machines are the latest generation of British Broadcasting Corporation Micros. They offer, at low cost, all the basic features with expansion capabilities. Both machines have a 512 Kbyte ROM and a 1 Mbyte (unformatted) 3½" disc drive. THE 400 SERIES The more powerful 400 Series offers considerably increased expansion capabilities. These machines are the new range of Acorn Computers. The ARCHIMEDES 410 has 1 Mbyte of RAM; I Mbyte (unformatted) 3½” disc drive; a hardware floating point unit option; a coprocessor bus; a hard disc controller; a four socket backplane; 512 Kbytes of ROM. At the top of the range is ARCHIMEDES 440. This machine possesses all the features of the 410 as standard, with the adoption of 4 Mbytes of RAM and a 20 Mbyte hard disc. ARCHIMEDES is an open system and its flexibility is achieved by fitting any of the following modules (peripheral modules) via a backplane: • hard disc controller (300 Series only); • ROM extension board; • MIDI music interface; • SCSI; • hardware floating point unit; • Ethernet module. Third party suppliers will be meeting other user requirements. 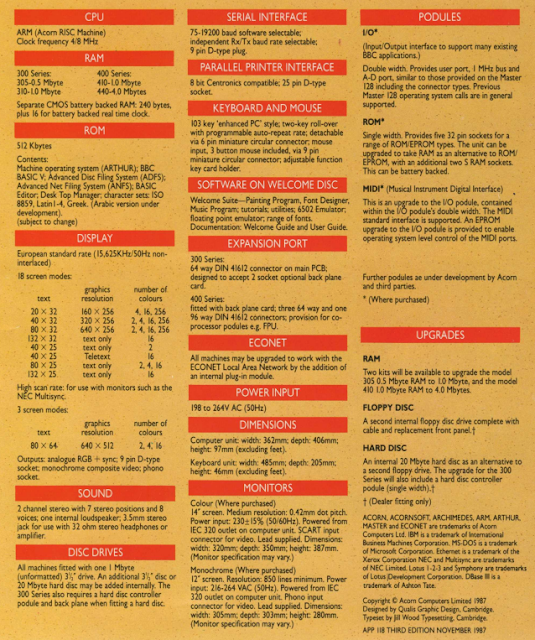