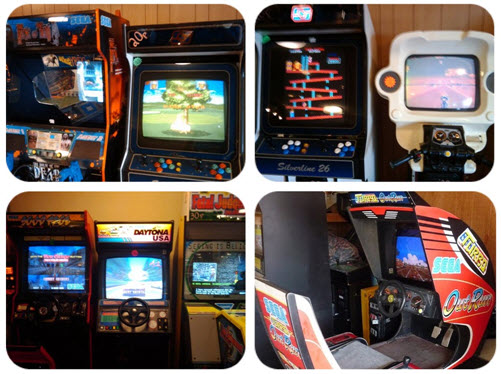 What was once old, appears current again, and although prehistorik by todays standards, the simplicty of early video games still see us wishfully reaching, and scouring our memory banks for those once forgotten classics.

I think it's safe to say, that Retro games have found a new home amongst our younger generation of folk, on next generation hardware. But because of our throw-away mentality of yesteryear, the kids today will probably never experience these games, as the gods intended.

Shame then, as the Arcades were a giant first step in gaming... it was an era of Space Invaders, Pacman, Defender and hot girls, ahem. These days, the only place you'll likley find an Arcade machine, is in a collectors garage, or warehouse gathering dust. The culture, friendships and atmosphere that sprung up around these places, are almost a thing of the past. Once we've gone, no one will ever remember they happened.

Hallelujah then - to the small coastal towns and seaside resorts i recently visited in Wales, these guys are single handily keeping what we once took for granted, very much alive and kicking. I spoke with one of the owners who informed me that people from all over come to experience his old games, especially classics such as Outrun and Afterburner. With permission, I climbed into an ageing original Outrun cabinet, for probably the last time, and for the first time on a freebie.

The small country of Wales, stapled to the west of England is one of the last great bastions of arcade entertainment, and a true link to our past. On my travels I've played originals such as Space Invaders, Galaxians, Pac-Man, Outrun, Star Wars and Donkey Kong, to name a few.

In closing, It's all very well and good playing these Arcade classics on an XBox 360,
PS3 or iPhone, but with their guts ripped out, its not quite the same experience.