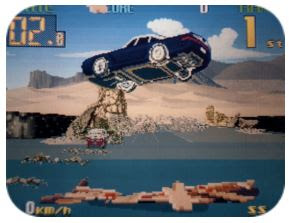 What's it all about:

In early 1989, Storm released the coin-op Big Run. The game was loosely based on the world famous Paris Dakar. And in case you didn't know, Dakar is the capital of Senegal which is situated on the West coast of the African continent. Since 2009, due to security threats, the race is no longer held in Europe and Africa, these days Argentina and Chile host the endurance event.

The original event trailed around 9000 kilometers across the Sahara and the tropical Savannah. It was generally considered the most challenging race on earth. The Dakar, did not enjoy this reputation without a price, many have died over the years, or returned home with broken bones. It's a race for survival, where reaching the finish line seems challenge enough.

Big Run is an impeccably well made game, that plays like the child of Outrun and Wec-le-mans. The whole experience is wonderfully continuous, unexpected, incredibly fast and frantic, and rewards for aggression and risk taking.

You'll need to steer your super-tough Porsche 959 rally car, through six of the toughest stages of the Paris-Dakar, in record breaking time. Unlike other racers, where even the slightest knock can be fatal, this car has been built to last. However, every rock, stone or collision slows you down, and this can be a might frustrating, especially with the tight time limit.

Is it any good:

Big Run is a fun racing game, a pure arcade racer, that never lets up. The track variety is definitely the highlight of the game, with a healthy disregard for reality, and especially the laws of physics. The game is powered by three Motorola dedicated CPU's and a YM2151 sound chip. The graphics still look amazing today, sound is nothing short of amazing, and the game moves at phenomenal speeds.

The Amiga version especially, performs admirably (Although graphics could have been better). The game does seem a bit simple though when compared to Crazy Cars 3, or Lotus Turbo.

The Atari ST version was rated 20% by ST USER, who thought it was one of the worst games on the system.

The game was also rumored for release on the 8-bit computers. The Commodore 64 and the Spectrum/Amstrad versions were apparently in the early stages of development, but canned at the last minute.

The SNES also had a conversion, but was only ever released in Japan. The game I played was very poor indeed, and hardly resembles the coin-op.

How can we play it:

The best way of course, is on the real hardware. All the major emulators support Big Run, I recently played it using a PSP.