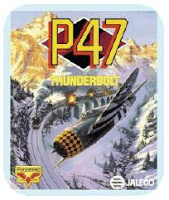 In the midst of Spitfires, Messerschmitt's and Hurricane's, there was one world war 2 fighter, nicknamed the 'jug' (short for 'Juggernaut') that packed an almighty punch. The Jug entered the war in 1943, piloted by the 78th and 56th Fighter Group of the 8th Air Force, with a kill ratio of 8 to 1... changing history forever.

When playing these types of SHMUPS as a kid, I had no idea of the historical significance of it all. Back in the day, it was just a really good shoot-'em-up, that moved at pace and looked really good. Although highly inaccurate  the game follows the real life struggles of the American fighter, as it prowled above the skies of Northern France, Egypt and North Africa.

How does it play

P47 is a horizontal scrolling shoot-'em-up (No need to fill out any forms), with bags of pace, outstanding graphics and rigorous gung-ho game-play. All stages feature continuous horizontal scrolling, with zee-Germans coming at you from the top and far right of the screen. The idea is simple, shoot them before they shoot you.

Extra weapons are handed out, by shooting (War never made sense) allied helicopters. At the end of each level, there's a horrible Nazi baddie to take care of, before proceeding to the next level. On level two, you're flying high above the clouds, whilst trying to cause as much damage as possible.

The action isn't without its problems, and on various levels you have zero defense against the incoming rockets, having to rely solely on messy evasive maneuvers.  On the plus side, the graphics are nothing short of amazing, and really push the 8-bits to he max. Another plus side is that you get to bomb the crap outta the ground targets, and sink one of the biggest on-screen destroyers I've ever seen.

All versions are authentic, with the Amstrad version delivering well within the machines capabilities. The Amiga, PC-Engine and ST efforts are equally as good, if not better, but can easily produce bigger and better screens, and animate much faster than what's on offer here. For me, when you find a game that graphically looks the part, and sounds the part... it's a bit of a luxury to find it plays the part. This is without question, one of the better SHMUPS to appear.