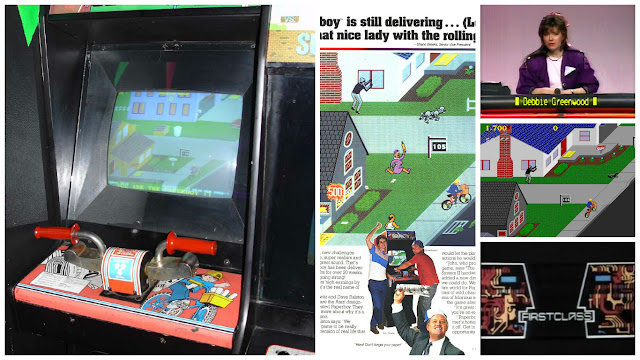 I first saw Paperboy on the telly, the show was called 'First Class'. I'd get home from school and tune in on the dot at 5:45 to the BBC to watch it, it was basically a quiz show for kids, but with video game challenges tacked on for good measure. I remember the host 'Debbie Greenwood' she would talk to a computer system called 'Eugene' and he'd respond back to her with on-screen text. If you were lucky enough, you had the chance to win an Archimedes computer for your school, the computer I always wanted, but could never afford.

They also featured games such as 720, specifically the downhill skate park section, it was fast and furious, the host Debbie would comment in the background as the contestant progressed, you basically had to take it steady, tight corners came out of nowhere, later levels included water hazards and big air, it was a great game, but I remember being on the edge of my seat, almost willing the player across the finish line, kudos when a contestant pulled it off, especially with thousands of other kids watching.

The Paperboy rounds were more of the same stuff, I remember watching and thinking that I had to get my hands on this game, to me it was everything I'd come to love about video games and more, my 1980's obsession for anything from across the pond was almost complete. It was definitely a tough challenge for contestants, but sadly I never got to experience the arcade version of Paperboy, I saw people playing on it, but unfortunately I ran out of time on several occasions and we had to leave.

I did, however, play it on the Amstrad CPC a few months later, it was a very good conversion, but it sadly lacked sound. It wasn't until the emergence of Mame, that I properly experienced what the kids of that tv show had experienced a decade before, only years later on my PC. I played the Mame version for hours on end, starting as you do on Monday's and worked my way through the week collecting bundles of papers, breaking windows, avoiding street drains, nut jobs with lawnmowers in the hope of keeping my subscriptions. Definitely my kind of neighbourhood, I'd have lived there given the chance.

Last month, I finally tracked down a full standing Paperboy cabinet, it was a free to play model and I literally poured several hours into it, it felt about ten times better than the Amstrad CPC version I played in the 1980's, with fantastic sound and speed, I really loved it, could have kicked myself for missing out on this the first time around, would have taken it home if I had the space.