Games We Used To Play - Banshee 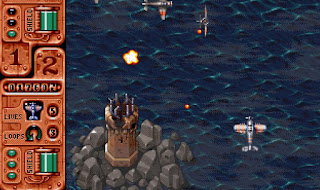 One of the best games I've ever had the good fortune to play, let alone on the Amiga. I'm talking about all platforms. Truly brilliant stuff, graphics to write home about, and sound effects so good that they negate the need for in-game music.
It's criminal that Banshee was only released on the Commodore Amiga and CD32, as this deserved a wider audience, especially on the more successful console's, namely the Megadrive and SNES. There's no doubt that Banshee went on to inspire many more shoot-em-ups throughout the same decade, as a year later a game called 'Tyrian' was released for the PC, that shared certain familiarities with Banshee (now available as freeware, check it out). Tyrian

I had fun playing this one... Enjoy!