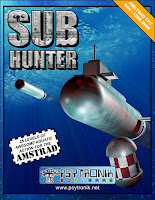 The Amstrad CPC was never really catered for when it came to the beloved shoot-em-up genre. I know, I know... there was X-out, P-47 and R-Type, but the majority were crappy ports of otherwise good Speccy games.

In 2009, everything took a change for the better, and the trend is set to continue well into 2011. I’m talking Star Sabre, Dead on Time and the imminent R-Type remake. Imagine my surprise then, when I heard Sub Hunter was scheduled for a release on the CPC.

Sub Hunter really brings it home for the CPC. It's considered a Commodore 64 classic. It’s loved within it’s community, and now the Amstrad CPC has its very own shiny special version.


As for the story, just think government cover up, chemicals, and undesired effects. Basically the government have gone and dumped all sorts of shizzle in the ocean, and now the fish have increased massively in size and all turned a bit radio rental, mental. Never fear... the bigger they are the harder they fall. Your mission: Rescue the stranded folk, and wipe out the ever increasing fishy threat.

Sub Hunter on the CPC screams masterfully from the highest of roof-tops, above human audible levels. Surprised? Don’t be, as our very own resident hero Paul Kooistra, was again up to the task. What we have here is a chap who understands gaming, an enthusiast slash programmer, who really knows his onions. Paul is single handily putting the CPC well and truly back on the map.


The atmosphere is moody, but at the same time feels deadly. I found the game to be relaxing at certain stages, at others it was total mayhem. Sub Hunter comes fully loaded with 25 levels of all out action. It's tough, changeable, addictive and you've got to play it. It's the shoot-em-up I've always wanted, but never knew could exist on the humble CPC.

A cracking tune accompanies the action, the pace is fast, with smooth parallax scrolling throughout. The graphics are a thing of beauty, and really convey how much time and effort was spent, tarting them to maximum.

The game is rather excellent, and the whole thing should keep you captivated until conclusion. I’d have liked more end of level boss encounters, a high score table, and a difficulty level option, but you can’t win ‘em all, especially as the whole thing only uses 64K.

Based on a game by Frank Gasking & Richard Bayliss

Published in 2011 by Psytronik Software
Available from: Psytronik