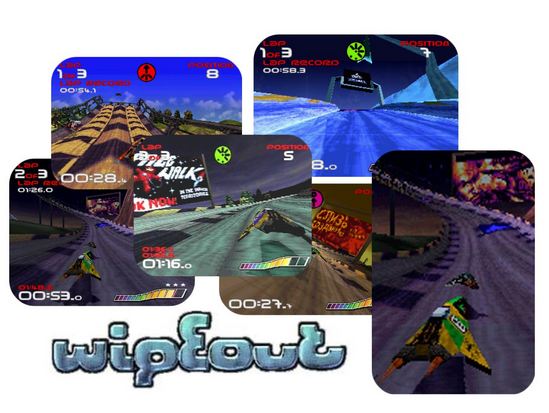 This old skool, but futuristic racer, used to be my crack pipe of gaming. Wipeout is a white knuckle adrenalin rush, from start to finish. The opening sequence sets the game up nicely, and the boys at Psygnosis should have been knighted on the presentation alone.

What's it all about:

The year is 2052, and Anti-gravity racing has become the biggest show in the Solar System. This ballistic racer puts you in the cockpit of a souped up craft. In the Championship mode, you must race across six massive circuits in a bid to secure first place. The tracks contain all sorts of crazy swerves and curves, and on the later tracks, you'll need to rely heavily on the air brakes.

How does it handle:

There are two racing classes in Wipeout. These are Venom (beginner) and Rapier (Hard as nails). If you're skillful enough to complete all six tracks, and finish top of the points table, you'll be delighted with the upgrade option to enter Rapier mode. Rapier sorts the men from the boys, and you'll need to unleash all of your skills harnessed from the Venom experience, and then some. The craft handles beautifully throughout, and you always feel massively in control. Hitting the walls can prove annoying, especially being brought to a sudden halt, but this is only minor, especially once you learn the tracks.

There's a selection of four teams to choose from, and eight contenders proudly prowl the track. I always go for 'AG-Systems' as the craft gives a good balance of speed vs handling. The other crafts Auricom, Qirex and Feisar present other strengths and weaknesses, with Feisar offering the easier of all the rides.

You can't go wrong with a racer like this. There's a massive assortment of weapons, along with power-ups that are pre-loaded onto the craft. These items can only be activated by flying directly over them, and are represented by a small grid with a splash colour on the floor. Weapons consist of rockets, missiles and mines... along with an earth-quake affect, that literally lifts the track before you.

How long until it bores me:

If Wipeout itself isn't enough to send you spinning, the in-game music from Cold Storage, Orbital and the Chemical Bros should send you into a dizzy trance. I personally could play Wipeout for hours, if not days on end. In fact I'm still enjoying this original title some seventeen years later.

It's slightly less engrossing than later iterations, but it still has a certain charm and then there's the replay element to consider. The split screen two player option is frantic, and I remember having arguments on who crossed the line first. Jump into an F3600 today, and race around the Solar System.