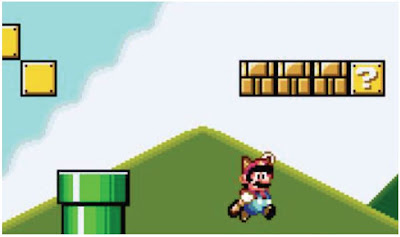 A few weekends back, I was trawling through a local car boot sale and caught the gaze of a SNES looking back at me. It was loosely boxed, with lots of games piled horribly high, the majority were tightly packed and squashed together. As you can imagine, a worst case scenario for a SNES cardboard box.

Within seconds, I asked the guy "how much?" [trying my best not to prove overly desperate] He replied "er dunno, give me twenty". I paused for a few seconds and was just about to snap his hands off when his mate piped up and said "you can have that lot for a fiver, we're not taking anything back with us" he then proceeded to throw in even more goodies into an already overcrowded box. Seconds later, the box now included an N64, a ZX Spectrum +3 and several more games including a copy of Super Mario All-Stars, which brings me to my review.

I was never a fan of the early NES Mario games until Super Mario World came along on the SNES. I enjoyed Mario in his 1981 debut 'Donkey Kong' but Mario on the SNES was leaps and bounds above everything and anything I'd played up until that point. I remember thinking how wonderful it was that Super Mario World came bundled free with the console and how easily you could save the game.

The electronic keyboard music was fantastic and still resonates in my head today, along with the underwater and memorable echo in the caverns. The music gave the impression of risk, and could set an energetic pace when needed... sound effects including the bongo drums were simply glorious.

It's basically the same style as previous Mario adventures, only this time the graphics were severely ramped up a notch, in a similar sort of way that GTA made its transition from the PS2 to PS3. Sprites were now incredibly detailed, with instantly recognisable characters and an abundance of colour. I didn't appreciate it at the time, but Super Mario World took over three years to develop with a team of sixteen people. Looking back, It's easy to see why, but despite all of the above, I was still shocked to later learn that Miyamoto (Game designer) claimed that the game was rushed, and unfinished?

As Mario, you could pick up all sorts of gear, there was a super cloak that enabled him to fly all over the screen, a star that gave him invulnerability and a flower that allowed him to fire lava from his face… not to mention the birth of Yoshi, a two-legged Dinosaur with an appetite for any sprite that moved.

There were a bazillion tasks to complete before you made it anywhere near the castle, with an even slimmer chance of defacing Bowser, let alone rescuing the Princess. My sis would work out all kinds of ways to complete a level and nailed every disposable trick available to our plumber. I'd watch her play for hours, envious almost, with a disbelief at how effortlessly she'd sail through each and every level, racking up the highest of scores, whilst revealing a treasure trove of developer secrets. I did eventually complete the game, but only after watching my sister sail through.