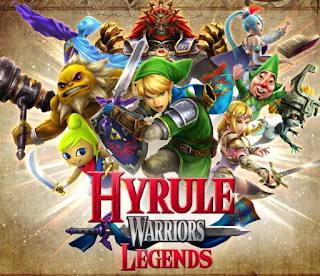 I’m not the worlds biggest Nintendo fan, but of late, the software being released, has started to massively turn my head. For instance, I’ve spent the last couple of nights, and early hours of the morning, playing the awfully spectacular Bravely Second: End Layer, Stella Glow, Kid Icarus: Uprising and now the all new Demo, Hyrule Warriors Legends… What’s happening within Nintendo?

The latter plays like a bunch of retro games all carefully stitched into one, at times you feel like there’s a bit of Gauntlet going on, a touch of Smash TV and bags of Sword of the Berserk. The rest, including strategy elements, borrowed from the best games of Nintendo's past. It's early days, but the demo has definitely got me excited.

I’m desperate for more, shame the demo doesn’t last long, I completed it in less than thirty minutes, especially when you consider i’m still playing the demo version of Bravely Second, and already several hours in. Still, I’m really excited about the 3DS, especially as SEGA seem hell bent on releasing nearly every game from their back catalogue of games, a new welcomed arrival being Power Drift! But I have to ask, where's Turbo Outrun???

2016 could be the year of Nintendo, especially if their trend of diverse software continues to grow, and let's not forget the NX…
Nintendo Nintendo 3DS Sega Super Nintendo Virtual Console