Why we love Star Wars… 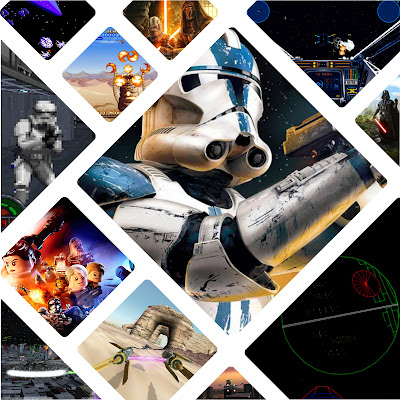 Everything Star Wars is fantastic, from the Millennium Falcon to Storm Troopers, we love it. It's hard to believe that Star Wars has been with us now for nearly forty years. Episodes four, five and six, still impress today, but for me, it was 'The Empire Strikes Back' with its amazing story, light sabre razzmatazz, and Jedi powered party tricks, that forced me into a sedentary, Jabba-like state. The games didn't help me either, as I've played nearly every Star Wars game ever released, and yet somehow lived to tell the tale.

Naturally, I've not been able to list every game, but special mention must go out to 'Shadows of the Empire' 'Force commander' 'Knights of the Old Republic' and 'BattleFront'. Without further ado, below are the games that stood out from the crowd?

It's Star Wars! A no-brain shooter, but feels just like being in the movie. It's pretty basic stuff, with smooth simple controls, authentic looks, and sounds, but over way too quickly.

It's great because you pilot an X-Wing in space, throughout differing environments, but more importantly, you take control and centre stage in the Death Star trench run. No other game has ever come this close to recreating the thrill and accuracy of the movie.

This was officially the first game where you got to experience playing on the side of the Galactic Empire. You played Maarek Stele, out to destroy the rebels and ultimately explore the dark side. The graphics have dated badly by today's standards, but for a while, this action-packed shooter was the only game that allowed us to pilot a Tie Fighter and make our evil space fantasies a reality.

Tie Fighter replicated the deep space battles and exhilarating action of the movies. The game successfully captured the vastness of space, creating an illusion of endless possibilities. This one for me immortalised the franchise amongst PC gamers and still remains a firm favourite today.

Very few games have matched or even come close to the diversity and core mechanics of Rogue Squadron 2. From AT-ATs to the Millenium Falcon, this was the game that allowed us to pilot all those lovely iconic lumps of plastic, we pretended to fly around in as kids.

From the iconic intro to the magnificent orchestra, this was the first Star Wars game to fuse gaming and movie into one. It truly felt like another level and a new age in Star Wars video games. Like with the original 1983 arcade effort, you piloted an X-Wing on a mission to destroy the Death Star to the sounds of R2D2's beeps.

Star Wars thrills hit the SNES in 1994, what looked like an average shooter, turned out to be one of the Super Nintendo's finest hours. The Empire Strikes back and return of the Jedi followed, but never quite reached the heights of this sublime original.

At the time it was considered the best game of Star Wars we'd seen on a 16-bit console. We were stunned by the graphics and cinematic sequences! JVC gave us a great platform experience, but cleverly revived the bygone vector thrills of the arcade original, now in 3D and with superior gameplay.

Pilot your very own Rebel Alliance X-Wing, Y-Wing or A-Wing into raging battles against the evil Empire. Smash your way through Star Destroyers, villainy and all types of scum, in this superb, fully realised 3D Star Wars universe.

You could practically go anywhere, pick a fight with anyone and give your wingmen orders. The music was spot on as well, especially with the 1998 re-release, that featured CD-quality audio.

Developed by AM5 and Lucas Arts and released by Sega. The game is completely based on the pod racing section from Star Wars: Episode I – The Phantom Menace.

Helped the world go mental for Star Wars. Shared a similar concept to Wipeout and F-Zero, controls were amazing, it featured authentic music, fast racing and looked like the movie. It was ported to many home systems, with favourable reviews.

Dark Forces introduce us to Kyle Katarn, a soldier of fortune, working for the Rebel Alliance. You must creep through sewers, leap from tall structures and search your way to victory. Worth checking out if you’re looking for a good FPS

It was banned in Germany! Improves on Doom, with multiple floors, ability to look up and down, jump and crouch, and tread water. Kyle Katarn also screams "Uuuuarrrgggghhhh!" If you fall or leap from a high structure. We also see the emergence of the ‘Dark Troopers’, giant mechanised machines that you have to battle throughout.