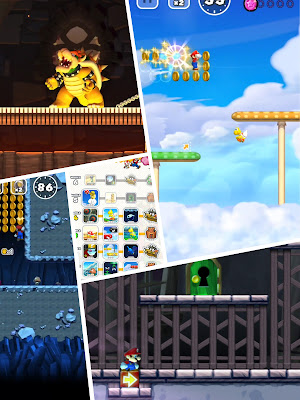 Ouch! £7.99. FFS! Screw you Nintendo! That's bloody expensive, but take my money you dirty rotten scoundrels. But know this, I'll forever hold a grudge against you.

It's quite sickening what Nintendo have gone and done here, they've given us the first few levels for free, hooked me in, and then fleeced me of £7.99 of hard earned sterling. I'm already addicted (business as usual Nintendo)! The lure and temptation are too much with the first four levels being bloody brilliant, easy to control and capture you from the start. I'm enjoying it, but that price has left a bitter sickness deep within.

The world tour mode, the only one I've discovered thus far, appears to consist of only six measly worlds, with four sections within each and the "end level" boss at the end of each section. The first world is easily pushed aside but does enough to prepare you for the trials that lie ahead. The second world reminds me why I hate Mario games; it's not because they're rubbish, it's because I'm crap at all of 'em. I get the feeling that a seasoned Mario enthusiast like my sister would whizz through this experience in a heartbeat. I normally get about halfway through and end up giving up, I've tried 'em all, Super Mario Bros, World, 64 and Galaxy, but I lose interest as the game usually becomes way too difficult for me to persevere with. In Super Mario Run, the difficulty is pitched just about perfect, I'm still struggling, but more determined than ever to complete this now, I'm giving it every ounce of concentration, and despite my platform inadequacies, I'm strangely loving it. You know what, Super Mario Run has definitely put a smile on my face, even my wife gave it a passing glance.

I should probably mention Toad Rally, a daily occurrence where you race off against all the colourful characters throughout Nintendo's empire, but when I say race, it's more of a side-scrolling affair, Track n field if you like, only collecting coins in style, building up a toad fan base using a weird kudos system, and then housing them within the castle grounds. I'm sure there's more to it, but for me, at this moment, it's all about completing the world tour.

Don't hate on me for saying this, but at times, it feels like Nintendo have borrowed a few playing elements from Sonic, all the sliding around, quick time running jumps and being catapulted through the air whilst trying to collect coins is great, but strangely familiar to Sega's offering, only better. The airship level on world 4-4, quite literally tested my platforming skills beyond their crappy capabilities, by sheer luck, not through determination, somehow I made it through, and by some stroke of wizardry, I continue to advance.

In a nutshell, it's gorgeous, fun, but somewhat limited in regards to content, but who knows, that could be remedied in the next update? I haven't noticed any lag, issues with 'internet always on' or reliability. I'd just like to clear one thing up, though, it's definitely not worth the asking price, and I'm quietly convinced I've played better, more in depth games from the App Store for half the cost, but equally it's definitely something to celebrate, what with it being Nintendo's first foray into mobile gaming.