In 2019, Batman Group teased us with a sneak peek of their upcoming racing game — Vespertino. It shook the Amstrad community to its very core. Better still it will be released in two versions, a 128K disk version or a cartridge version that will cram everything it can into an 8bit. Vespertino is currently in transit, with the hope that we will see a 2021 release and will offer full compatibility across all CPC range of computers.

This year as part of the CPC 64k Retro Dev 2020 competition, CNGSoft released a game called Fire Tyre for the Amstrad CPC. Harkening back to the truly classic racers of old, it was intended as the spiritual successor to the arcade game Pole Position. Fire Tyre exceeded Amstrad owners expectations, proving to the community that there was a demand for traditional, racing games with classic gameplay and refreshed mechanics. Unfortunately, this did nothing more than to whet CPC racers appetite, as the game turned out to play brilliantly, but cut relatively short due to memory constraints.

So these are the games to revisit whilst we wait for Vespertino:

No idea what happened to the first Rally game, but this sequel more than made up for it. Great big sprites, a fast-moving convincing road and traffic galore. But this is more of a quick race every once in a while, after an hour of play you’ll have seen everything there is to see, including a superlative night stage that reminds me of the 1983 Atari game ‘Enduro’. For the time there wasn’t much competition. Primitive by today’s standards, but still fun to play. I personally love it! 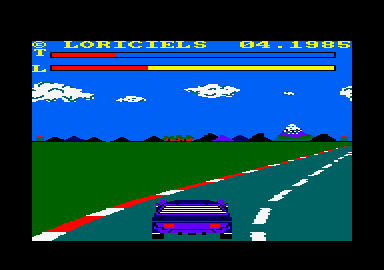 Produced by Activision, this was a fantastic SEGA arcade conversion of a game that had no right to be this much fun on an 8bit system. Big colourful vibrant mode 0 graphics win the day here, with a fast road, dips, hills and a cracking spinning animation should your car venture too close to the side of to road or fall off. This is quite a challenge to see through until the end, but worth every ounce of energy. 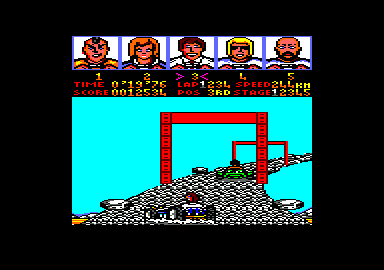 When thinking of racing games on the Amstrad, Lotus tends to be the first that comes to mind for most people. This racing game left a profound impact on the racing genre, it's just a shame we didn't receive Lotus 2 or 3 as seen on the Commodore Amiga. It shouldn't come as a surprise to anyone to see Lotus on this list, for example, although originally released for the Amiga 500 and later given an 8bit lease of life, the game, music and graphics are as grand as fans would expect from an 8bit title, but besides that, this 8bit port lets two players go head to head. Another unique feature of this game is the radio system before selecting a race. It's another game that probably should never have been entertained on an 8bit system. But thank goodness it did. 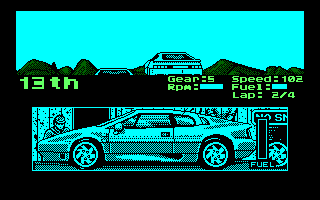 Using the Amstrad's higher resolution - mode 1, this wonderful fast-paced arcade conversion from Virgin Interactive achieved everything that Electric Dreams set out to do years earlier with the failed arcade conversion of Super Sprint for the Amstrad CPC. How they did this is beyond me. everything plays out just a well here as it did in the superlative arcade original, minus the one-tonne arcade cabinet. This really has to be played to realise what a great job the programmers did. Hence it makes the list. 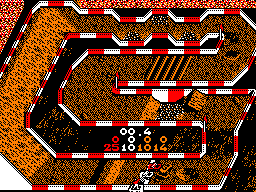 Takes the same great premise as Grand Prix Simulator and betters it on the Amstrad CPC. This time the Oliver Twins introduce three-player action and it's the best Super Sprint clone on the system. Enhancements include crashes, damage, a time carryover feature so that the faster you finish the race, the more time you're rewarded, with even better-sampled speech than the first game. The graphics and improved animation are very fast indeed. Definitely, one to revisit and even better if you've never played it before. Impossibly unrealistic play, and a lot of fun. 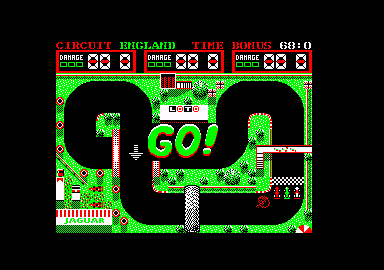 When Atari launched Pole Position, amidst a blaze of publicity, although there had been many other racers at that time, many were monochrome or not in the least bit playable. Pole Position afforded the player a behind-the-car view, colourful graphics and a variety of courses to power through. Sadly, Amstrad owners missed out on this fabulous arcade racer, but then Wec le Mans appeared. The sound and graphics wiped the floor with all other racing games. The home computer conversion to the Amstrad CPC might not have had all the flair of the arcade behemoth, but it came packed with all the same frantic gameplay, and Pole Position was never thought of again. 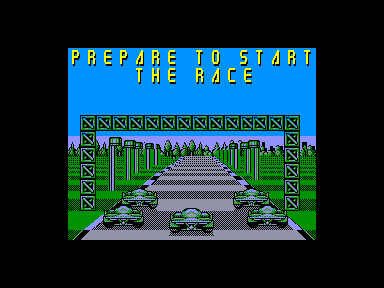 Nigel Mansell's Grand Prix was launched by Martech. It was a mix of managerial and race car simulation, featuring customisable options and just about anything else you could fit into 64K, including car wrecks too. It's quite possibly the best real simulation of driving on the Amstrad CPC to date. Clutch, six gears, fantastically smooth and fast filled graphics throughout. Nigel Mansells Grand Prix is a guaranteed hit. 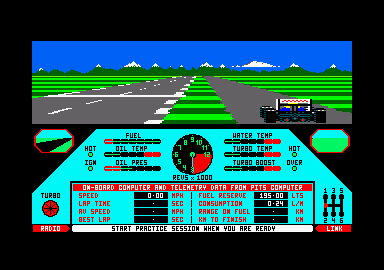 The home computer conversions and versions above only served to whet the appetite of many a budding racer. My computer passion for race games was fuelled back in 1984 when Amsoft released 3D Grand Prix on the Amstrad CPC. It featured an in the cockpit view from a formula one car, a smoothly scrolling 3D perspective road and several different tracks from around the world. 3D Grand Prix could be considered the forerunner to all other modern race simulators. 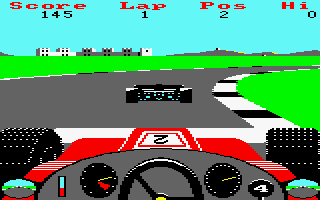 It looks like the roads of Amstrad have been well and truly tarmacked over with added interest. The arcade spawned Continental Circus (which should have been called Continental Circuit). It's quite possibly the best F1 based arcade game inside and outside of the arcade, which holds true for the Amstrad CPC conversion as well. Put your foot down and you just might win a race. 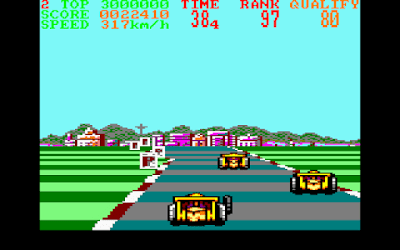 Before the graduation of some leading 8bit programmers to 16bit machines. They gave us ChaseHQ. How fitting that they produced one of if not the best racing game ever on the Amstrad CPC. The speed and feel were breathtaking back in the 80s and it's no slouch today either. You'll need to muster every ounce of skill you've gathered practising on the other games. You'll need it because ChaseHQ is a tough challenge and one that you'll come back to over and over again. 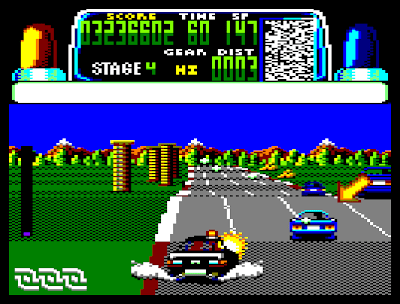