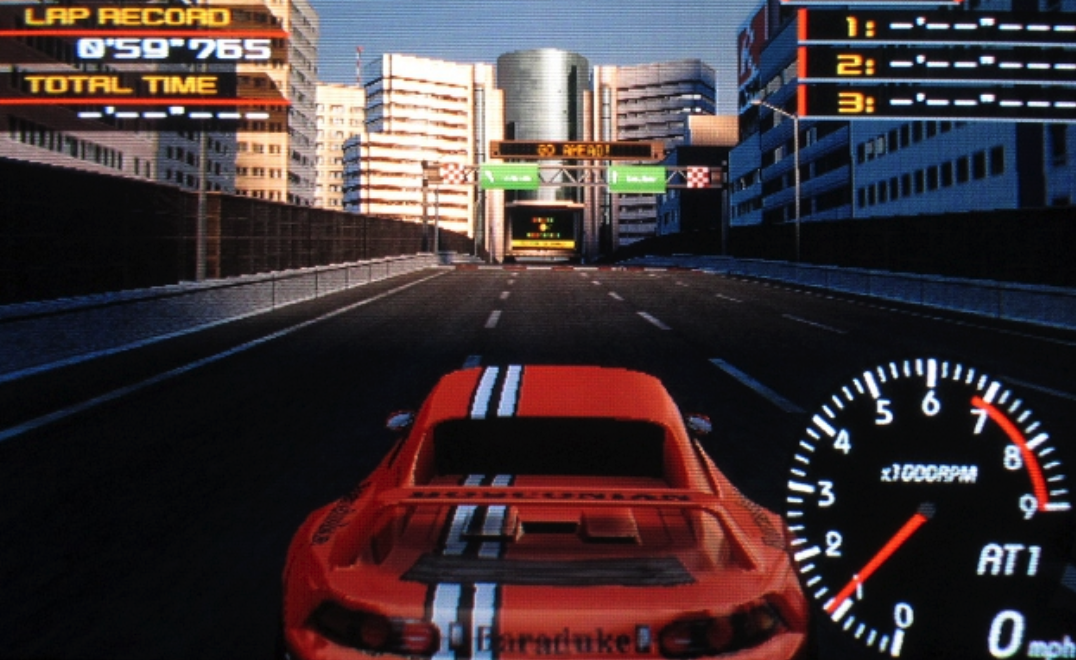 I’ve been chasing pixels for as long as I can remember, the craze started with Pole Position and spiralled out of control with Outrun! Ever since then I’ve been firmly shackled to the genre. Racing around in a pixelated Ferrari at breakneck speeds has always been that little bit more achievable than racing in the real world.

The discovery of certain games can happen when you least expect. Whilst answering the call of nature, I stumbled across a Ridge Racer V review in an old issue of Edge. I used to feel like a bit of an interloper when it came to the Playstation and I completely missed Ridge Racer the first time round. You see, I backed a different horse - the Saturn, then later the Dreamcast. I did however still have access to loads of cool games, and I played some great driving games such as Sega Rally, Daytona USA, Ferrari F355 and MSR.

A few weeks ago I was lucky enough to pick-up a shiny, nearly-new, copy of Ridge Racer V, it was found in the 'Billy bargain' of bargain basements for just one pound! What a lovely little racing game it turned out to be, bringing all the wishes and desires one could only dream about from the genre. The Ridge fraternity will probably push you towards R4, as it’s considered the pinnacle of the series, but without question, this was and still is an essential title, especially for PS2 collectors. If you are reading this and wondering, have I played the original? The answer is yes! Although only briefly, many years ago, in the in seaside arcades of Aberystwyth.

The petrolhead in me really wants to dislike Ridge Racer, but I can’t break this new found love affair. I guess I love how Namco effortlessly invented a powerslide system that has allowed me to take corners at full pelt, sideways. Nowhere near as much fun or memorable as Sega Rally (A must play for me) but still equally riveting stuff. Ridge Racer V is completely devoid of any type of realism, car handling is ridiculous, the invisible kerbs annoy, but bizarrely, it’s now one of the first games I look for when going for a quick spin.


Namco gives a big two fingers to all those stern-faced open world intellectual racers. It dispatches with the seriousness in favour of more forgiving action. It has that 'I need another go' quality, compelling you can go back in and better your game. There’s plenty of modes – Grand Prix Mode, Versus Battle, Time Attack, and Free Run. All have something to offer, but it’s the Grand Prix mode where I had the most fun. Night racing is the real heavyweight, fast and frantic, but the oval track towards the end massively tested my limits in regards to speed, skill and reflexes.

There's an above average design mode where I spent a few hours customising several cars, it’s just a bit unfortunate that I didn’t really get to see the fruits of my labour. Namco included, what can only describe as probably the worst external view in the world ever. The internal view is great, similar to ferocity you get from Gran-Tourismo, but the external view kills any sense or illusion of speed from the off. That bloody car is way too big, moves like a massive piece of furniture, badly squashed in front of the screen. The only time I was able to appreciate the decorative art was whilst watching the superlative replays.

The draw distance keeps on giving, the scale is impressive, but there're maybe one or two occasions where the scenery displays 'pop-up' bulks from the intensity of the on-screen action. The cut scenes are beautiful, but maybe a little jaggy (Could be my TV) around the edges. I suppose I should remind myself that this was one of the PlayStation 2's first attempts, so I can at least forgive it for that. At times, the graphics in RRV reminded me of those in GT3.

Music borders on terrible to electrifying, some of the tracks wouldn’t feel out of place in a game of Wipeout. There’s this one track, Electroglide by Mijk van Dijk, seriously, check it out… Perfect for a night race, really gets those powerslides going. Sadly, I found the rest a little below average. The voice overs from the crappy Ridge City FM, seriously grate after the first hundred laps, but thankfully there’s the option to turn it off.

Warning! Don't play Ridge in easy mode, it instantly destroys the life of the game and replay value. The hustle and bustle of jostling for that elusive checkered flag will be lost, as you cruise easily into first place and mostly stay there. There’s also an unnatural bounce as you hit walls or another car, something you'd have thought the series would have addressed by the time of the PS2. The technique for power sliding through turns has been massively simplified, making the whole thing that bit more addictive to newcomers.

Ridge Racer V has done nothing to revolutionise the series, Namco stuck to what they knew best, pure unadulterated fun. Ridge Racer V is no phoney, and even though some still consider R4 to be the better ride, this is still highly flammable!
GAMING Playstation PS1 PS2 PSX Retro Retro Gaming Retrogaming Sony videogames