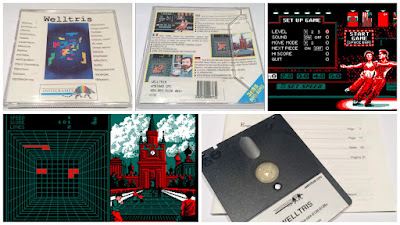 The Soviets strike again, only this time with innovation! I'm still struggling to understand how this one slipped me by. Twenty-six years later I'm scouring eBay, and the next minute, it's delivered through the letter box. This is basically Tetris with a 3D perspective, created by the same Alexey Pajitnov.

There're three levels of difficulty, starting with beginner, advanced and finally expert. Each difficulty settings features its own game speed, with the latter seeming almost ridiculous. WELLTRIS continually chucks shapes at you, this bit being similar to the original, the difference now is that you can rotate each shape around the four outer walls as you watch it fall deeper towards the ground.

There's sound, but nothing in the music department, sad really as I half expected the Tetris original, instead I found myself humming the original Korobeiniki soundtrack. The graphics are well defined, but seriously lack any real colour, it's also disappointing that all of the pieces are coloured the same. It doesn't matter, as gameplay is king, and this game throws up a good challenge.

The controls are tight, bizarre at first, but they do make sense once you get into the swing of things.
A nice little game, that is so far supplying me with a good little challenge, can't believe I missed this in 1990.

What did Amstrad Action think?