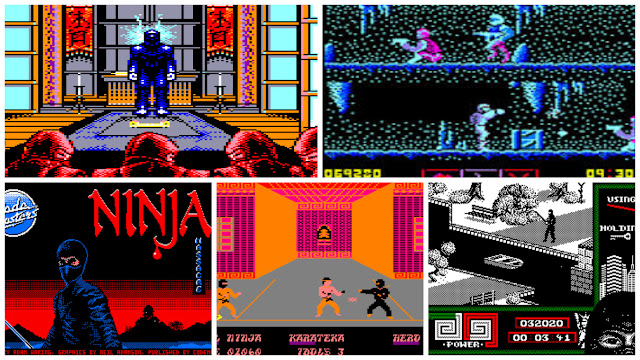 I was obsessed with Ninja films back in the day, Revenge of the Ninja, Enter the Ninja, American Ninja, you name it, I've seen 'em all, back to back on several occasions. As you can imagine, I collected and played anything and everything with Ninja in the title for my Amstrad CPC computer. I doubt I've missed any off the list, but if it didn't have Ninja in the title, it can do one, and that goes for those pesky Teenage Mutant Hero turtles! I also wanted to include Way of the Tiger and Avenger from Gremlin Graphics, but they failed miserably and were disqualified for lacking the word Ninja. It's not the end of the world, as some of the below games were absolutely brilliant!

I played this quite late in the CPC's life, it was a side-scrolling affair, budget from memory, but it definitely entertained me for a few evenings. I probably wouldn't play it today, but back in the day, things were more forgiving, not quite the Ninja punch I was hoping for, but at the measly price of £1.99, this was an absolute thrill.

Complete garbage by today's standards, but I played this until the end, not a great game, but not a terrible game either. There's so much wrong with the animation, level design and controls that I'd need to write a book on it, but at £1.99, it was perfectly acceptable back in the day. Very similar to Bionic Ninja, maybe a slightly better game in some respects, but nothing to write home about.

Loved it, mad for it! Can you believe this costs only £1.99, this smashes most full price efforts in regards to exploration and replay value? The graphics were half decent, the screen was nice and big and the quest was set at just the right difficulty, bloody good ninja game from Mastertronic, one of their best games.

Great on other systems, but on the CPC yet another full priced turkey. Looked good, even scrolled smoothly, but then it all went down the pan in the playability department. Shocking as I really like this game in the arcade, another game butchered to death by bad programmers on our beloved CPC.

Codemasters could do no wrong with me, (Transmuter never happened) this safe, but mediocre Gauntlet clone is actually quite playable, and as usual, that for me is where things count the most. The graphics are nothing special, but you can definitely progress thanks to tight controls and a good difficulty level.

Biggest load of crap I've ever played, I really looked forward to this game, it looked quite funny from the adverts, and I couldn't wait to try it out for myself. I'm not sure what it played like on other systems, but on the CPC it went straight into the bin, the best place for it. Complete waste of a tape!

It was a travesty of the highest degree, shouldn't have worked in the slightest, but I found myself digging it out for just one more go, deflecting all manner of weapons and objects was actually kinda fun. I would never recommend it, in fact, I'm almost embarrassed I even played it, only for those who like their punishment.

A blatant Speccy port that ruined what could have been a fantastic experience on the CPC. In fact, this is the type of game that was made for the CPC! Sadly, those greedy little bastards at System 3 thought they knew better. I've played it, completed it as well, but this is best played on the C64, the best thing you can do with the CPC version is steer clear unless you're thinking of a remake of course ;-)

Despite the predictable end of level baddies, this is probably my favourite Ninja game of the lot. It has everything, great scrolling, great graphics and loads of enemies on screen at once. The title screen and music are absolutely brilliant and the programmers included speech in the 128K version. Sadly it doesn't feature in-game music, but it just goes to show what can be achieved on the humble CPC.

This one plays a blinder and at a blistering pace. I prefer Metro Cross, but this still manages to impress me, especially when you consider the price difference back then. It's got nothing to do with fighting or the ancient arts, what we have here is just a good old fashion fun racing game, but ninja powered.

The biggest pile of horse manure the world has ever seen, makes Rick the Roadie look and feel amazing in comparison. Hopefully the programmer of this abysmal game wasn't let loose on anything else. If you ever see this game, run, run for the hills, it's that awful.

Horrible messy ill thought out graphics don't deter from what lies beneath, great gameplay. The controls are tight, the scroll is decent enough and the gameplay follows that of the arcade version very closely. If you can beat the arcade version, this is pretty much the same, all the moves and techniques work here to, not a sizzler, but defiantly worth a look if platforming and fighting is your sort of thing.