If you dig through old ZX Spectrum, Commodore and Amstrad magazines, you'll find interviews and a whole treasure trove of information from our long lost almost forgotten past. It's slow going, plod like almost, but every once in a while you might come across something that you've never seen or heard of before, things that can't be found on the internet. For example; I've searched high and low on the internet for information about old game sales i.e. Units sold for my favourite 8-bit games, across many formats, but unfortunately this consistently turns up nowt.

However, this hasn't deterred me, my mission is to seek out old information pertaining to these forgotten classics, the information is out there, but mixed up in a mass of detail. I'm quietly convinced this slug like approach has legs, heck I've even approached ex-programmers in a bid to find out as much information as humanly possible.

With that in mind, this is what I've uncovered thus far, after just a few hours or more of reading through old articles, especially from Mastertronic and U.S.GOLD, I believe I'm starting to get somewhere, but it does feel like I've only just scratched the surface.

I was surprised to see Matchday from Ocean software had only sold 60,000 units, with Beach Head lagging behind budget games such as BMX Racers (written by the David Darling, Richard Darling) and Squirm. As I read more into it, Squirm had actually sold more games on the C16 than on the C64, around 80,000 to be precise, with Mastertronic claiming that the first eight or nine games they released for the C64 sold around 50,000 on average. I already knew about Outrun, U.S.GOLD weren't shy about advertising the fact and I was kind of aware that Heroes did well too. The Way of the Exploding Fist appears to have shifted quite a few units as well, but this one is a little confusing as I've seen the game released under a few different labels including Melbourne House and Richochet, a subsidiary of Mastertronic.

Wish me luck... Hopefully, I'll have more information to share shortly, by all means, contact me if you can shed any light on game units sold. 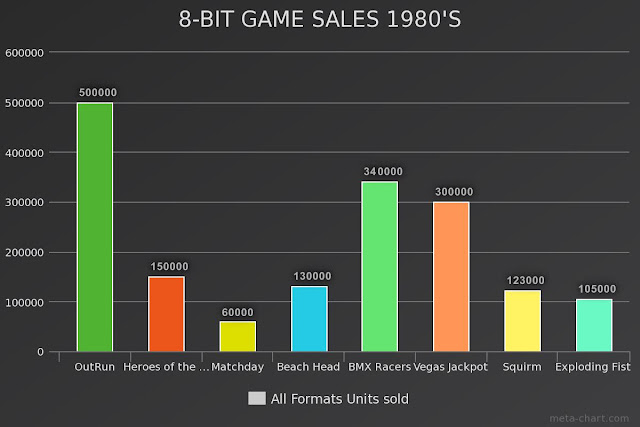