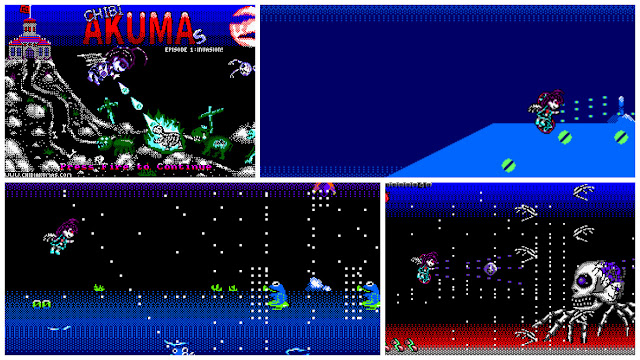 Here we have a bullet hell shooter for the humble CPC, it's been in development for quite some time, it features full-screen scrolling, up to 256 enemy bullets on screen at any one time and works across all CPC model of computers.

You can shoot in two different directions using a separate left or right key configuration, it works really well and independent of moving the character left or right in the traditional sense. Holding down the fire button slows character movement to a snail's pace, making it next to impossible to keep your finger pressed on the trigger, as you need to move quickly when faced with a certain type of enemy, especially when embroiled in a boss fight. It doesn't help things when needle-like bullets fly all over the place, I can't even tell if I'm being hit half the time and the player character is far too big to manoeuvre out of the way. You'll be seeing the "you're dead again" screen a lot, I mean jeez, the difficulty feels completely ridiculous, if you thought Dynamic games were difficult back in the day, then this one makes 'em feel easy in comparison.

How does it look?

Enemy sprites look alright, there's definitely a variety on display, in fact on one of the boss levels, a submarine races into view, it almost takes up the entire bottom half of the screen, it looks really good, especially as the animation shows the damage model increase the more you hit the target. The graphics are well defined, but at the same time look and feel a bit messy. Unfortunately, the game suffers from chronic slowdown as the screen fills up, but despite this, the pace still remains respectable. It is difficult to tell if I'm actually hitting the bad guys or not, the game just gives me the impression that bullets are passing through enemy objects.

Music just sounds like pots and pans banging together on a loop, I'm not even sure I could hear the in-game sound effects.

My expectation was high, screenshots looked terrific. A horizontal bullet hell shooter on the CPC for the first time. Unfortunately, those hopes were dashed quickly after my twentieth death inside of ten minutes of play. Never in the history of the CPC has such a great looking shooter been so unplayable due to difficulty. Whilst the game looks promising from the outset, it delivers an utterly dismal playing experience.

This is more of a tour de force in graphics than a game, a technical demo at best, with interactive elements thrown in for good measure. Kudos to the programmers for all the technical and visual splendour, but let's hope the creative juices behind this can give us something more in the playability department for the next game.

Despite everything above, we still have to remember that this is a new game, running on an Amstrad CPC in 2017 and for that, I should be thankful.

The game can be downloaded here: