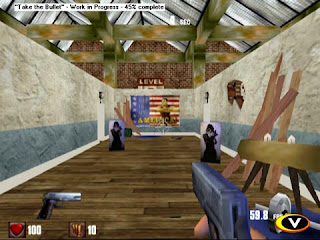 This shooter is set in the sixties, you are a highly trained bodyguard who must protect a presidential candidate, from a well-known gang, called the Children Of Gabrielle. 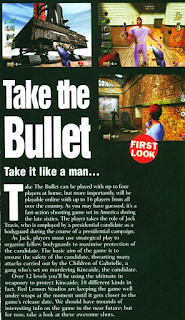 What's amazing is that this game has over twelve missions, over fifteen or more different weapons, with a wonderful option to play from either a first-person mode or third person view, but get this, Red Lemon were also developing the game to work with the Dreamcast's  official lightgun. The mind boggles at such a thought, can you imagine the likes of Virtua Cop or Confidential Mission where you're fully in control of where you walk? From what I've read thus far, this would require the use of the D-Pad, freely running around in this type of game would have been amazing and most likely a first. That's exactly what the developers were hoping for here, throw the above in with the added bonus of a Goldeneye four player split screen and the Dreamcast's online multiplayer system, with up to sixteen players simultaneously and surely this would have been one of the best games ever?

I've searched the internet high and low for a copy, apparently there's an almost finished version, even looked for an ISO to download over at EmuParadise, but sadly I'm yet to find anything to play. There's a video I discovered on Youtube from a guy called 'The Dreamcast Junkyard' he's played the actual game, so just waiting for him or somebody else to share it, who knows, the Dreamcast community is massive and very talented, I'm sure someone or a team of dedicated people could get it up and playable, especially when you see what was done with Half-Life.
Dreamcast Retro Gaming Retrogaming Sega videogames