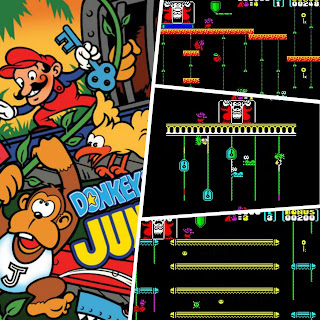 Just a few thoughts on the tribute game made with AGD, for the Sinclair ZX Spectrum. It's great and everything, but I'm confused? I'm still a massive fan of the original Donkey Kong arcade-style platformer from the 1980's. It is said to be the game that launched the career of Shigeru Miyamoto, but more importantly, Mario and Donkey Kong. The game went on to give Nintendo international stardom, with Miyamoto creating a legacy so powerful, that Nintendo and Japan should pray daily for his continued existence.

However, Donkey Kong Jnr wasn't a great sequel, in fact, Miyamoto himself thinks it's a weaker game. It sold well, but so did the USGOLD home conversion of Outrun, so sales don't really mean diddly squat, in regards to us gaming enthusiasts.

I did like the way this game reversed the characters roles, with Kong now caged and Mario becoming the antagonist. The game featured a good premise as well, instead of climbing the platform, you now traversed across several vines as you swung your way to the top of the screen. Swinging is massively frustrating, nowhere near as fun as the original, and accidental deaths happen far too frequent for my liking. The first game was massively addictive, where this is the complete opposite and less intense.

Donkey Kong 3 didn't improve the series either, so maybe this adds fuel to the theory, that original games are always the best. I here Crazy Kong City for the ZX Spectrum could be really good, early previews suggest we could be in for a treat.