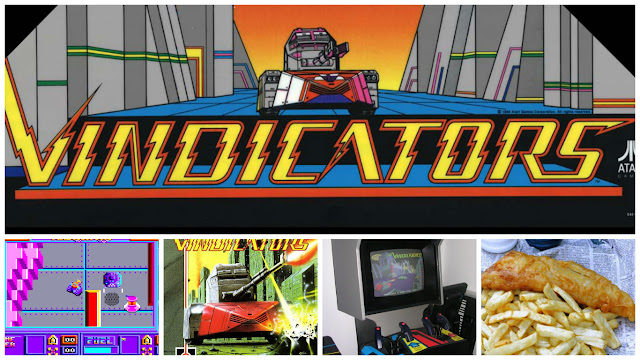 In the 1980s, My local fish & chip joint held a striking resemblance to a small arcade hall, I'd never seen anything quite like it, without fail they'd always have the latest and greatest arcade games, it was incredible, absolutely amazing! I spent a ridiculous amount of time there, I'd walk in after a few weeks of not going and be like "will you look at that!", new arcade machines everywhere. The food counter was on the left, but the main reason for the majority of my visits was to play on their growing collection of arcade games. The machines were badly but tightly packed into this tiny right-hand corner of the restaurant. It was a dream come true though, I remember they'd get packed to the rafters, especially after school, sometimes I just went to watch how other people played and completed these games.

Throughout the years, this is where I played classics such as Kung Fu Master, R-Type, Bubble Bobble, 1943, Outrun, UN Squadron, Pit Fighter, Bionic Commando and many more, I was always desperate to go back, and for a long time, it was the only source of access I had to these great games. The game I remember the most was definitely Vindicators from Tengen, it was absolutely mental, you would just jump in with another random player, or simply play with friends and family. The arcade cabinet was a heavy unit, with massive tank tracks at the base, can't even imagine how they got it in there, bulky as hell to say the least, but it looked amazing, elegant and from the future. I can't tell you how many coins we sunk into this machine, you could have two people controlling their own tank at once, it felt incredible, with a massive screen, fantastic music, and brilliant graphics. You basically had to move up the screen, a traditional approach back then, blasting the enemy tanks and turrets as you pushed forward, whilst trying to pocket as many upgrades as possible. If you made it to the end, you then faced a boss battle, which entailed taking out the core power to reach the next base.

That chippy might as well have been my home during those 1980's summer months, I did eventually complete it, in fact, I completed nearly all their games, must have cost me a small fortune the more I think about it, but massively worth it. The sheer scale of the Vindicators environment and attention to detail seriously left me dumbfounded, I would often imagine what it would be like to play it on a home computer. It wasn't long after that I found myself reading a copy of Amstrad Action, where they mentioned in a preview section that Vindicators were coming to my favorite 8bit computer, the Amstrad CPC. It was a frustrating wait until it finally arrived, a massive part of me felt they'd neglect to include a decent CPC version, but when I finally loaded it up, the loading screen, music, and level design looked near-identical, well in the sense that it was everything you could hope for on an 8bit. The programmers on this occasion had really outdone themselves, don't ask me how, but I wasn't expecting a masterpiece such as this in the slightest. ACE, the Games Machine, Computer & Video Games and my old favorite Amstrad Action magazine drooled all over it, I recall reading all the reviews, sometimes over and over, a few reviewers moaned about the controls, but I never had an issue with them, in fact, I thought it was very innovative in the way the programming team translated the control scheme to my humble Amstrad CPC, loved everything about the game, just couldn't get enough of it.

Back to the present day, the Fish & Chip shop is long gone, I miss those days, but I also miss playing on the arcade version of Vindicators and visiting to see the latest arcade games. A while back I managed to secure a copy for my PS2, it came bundled with the 'Midway Arcade Classics Collection', it was simply brilliant, took me right back, but as you can imagine, it was no substitute for the real thing. Still, beggars can't be choosers, so thank god I have this and the CPC version, in fact, I'm still guilty of playing this beauty of a game on the CPC, I just love it, it showed me that the CPC was a very capable machine in the right hands, I don't know who the programmers are, but I'd just like to thank you guys for the maximum effort you put into making this conversion great, it would have been soul-destroying to have received yet another poor effort of one of my favorite coin-op games, jobs a good 'en, can't thank you enough.
464 80s Amstrad AMSTRAD CPC Arcade Atari commodore 64 COMPUTERS CPC GAMING Retro Retro Gaming Retrogaming ZX Spectrum