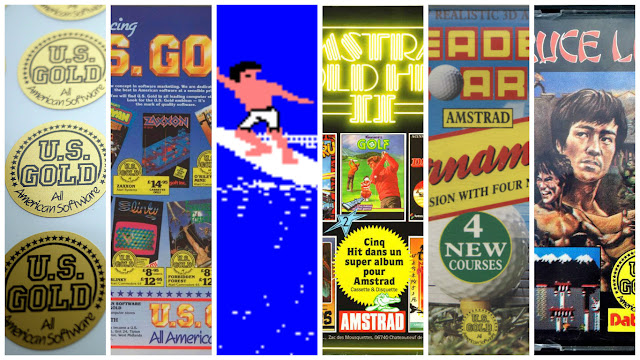 Everyone needs a shiny new game to play on Christmas Day, right? But what happened if that game was a U.S.GOLD title?

U.S.GOLD had a bit of an up and down relationship with Amstrad CPC owners. Most of their games felt like quick, dirty cash-in's, with big, bright, colourful graphics, broken controls; worse still, some of their games were riddled with bugs.

I'm not sure how you guys feel about it, but for me, playing the vast majority of their games on the Amstrad CPC felt like I was wading through treacle. I felt screwed over on many occasions, but didn't seem to learn my lesson. I'd fall for the same marketing candy time and time again, with the promise that this time, their new game for the Amstrad would be amazeballs! I think the final straw came with the title California Games, the Amstrad version was crap, I suspected nearly every single publisher after that, with the exception of Ocean, I kinda half trusted those guys. Just play California Games on the CPC and then compare with the Speccy and C64 version, it felt like a completely different experience, gone were all the cool sound effects and excellent music, replaced instead with complete silence and cut down graphics. It wasn't a complete disaster, despite feeling like it, let's not pull any punches, most of their games were crap, but a tiny minority, for some unknown reason were simply brilliant - Gauntlet 1 and 2, Rygar, Beach Head, Forgotten Worlds, Bruce Lee, Tapper and the excellent Goonies. But when you compared the average title to the other systems and then consider the abomination that was OutRun, not just on the Amstrad, but several systems including the ST and Amiga, you can't help but feel that U.S.GOLD didn't give a damn about CPC gaming enthusiasts or gaming in general. These bastards were out to fleece kids, and in my book, that's up there with Michael Jackson's sleepovers.

I think it was a very similar experience if you owned an Amiga. This was another computer treated as badly as the CPC, the owners of both systems appeared to receive a bum deal from U.S.GOLD, especially the Amiga, what with all those pesky games ported straight from the ST. I wonder if U.S.GOLD had a quality control department for the Amstrad or any other computer outside the C64?

I begrudgingly mentioned OutRun, in fact it still hurts thinking about it "Oooooh, the pain, the pain!" Surprise, surprise! That was the only item on Christmas day that turned out to be a complete bag of shit! What's also a kicker, is that I couldn't even complain, at the time we didn't have that much money, my mum had worked so hard to buy presents for me, I just would have come across as massively ungrateful, and my dad would have probably boxed me around the ears for complaining. I wager U.S.GOLD probably knew this, in fact they were probably banking on it, I never heard a single story about people returning that crappy Outrun game? On that bombshell, I never trusted them again, in fact I only ever acquired their plunder for the Amstrad CPC from the local car boot.

Now don't go thinking I hate U.S.GOLD, I have a Facebook Page that celebrates them. This is just a personal grudge, back from the standpoint of being an eleven year old kid, bitterly sore against the poor quality of titles they released for my beloved CPC. It was a completely different story on the C64, for instance, on the C64 I loved Impossible Mission, California Games, OutRun, Turbo Outrun, Last Duel, Spy hunter and DropZone to name but a few. It was a similar story on the Speccy, and as much as people slag off the rubber key'd version of Outrun, I thought it played a damn near authentic game, especially on a 128K machine. In fact when I think back, it was a bloody marvelous achievement, car spun on impact, flipped through the air like a Ferrari possessed, and the programming team included identifiable arcade music. I just didn't feel the same way about this game or many others produced by U.S.Gold for the Amstrad.

Sure, we all went gaga over Gauntlet 1 and 2, (Programmed by Gremlin, I later found out) but can you think of many others? They also ruined two of my favourite arcade games ever, with their piss poor conversions of Rolling Thunder and Final fight!

In closing, they never managed to utilise the CPC to its full potential, they got somewhere near with the Speccy and C64, but even that's debatable when you see what's being released for all three 8bits today. The Amiga and ST never escaped unscathed either, I feel as though U.S.GOLD plagued those poor systems with poor arcade translations as well. I suppose the clues were there quite early on, If World Cup Carnival wasn't insult enough, I'm a fool for buying the bug riddled Leaderboard on the Amstrad CPC.